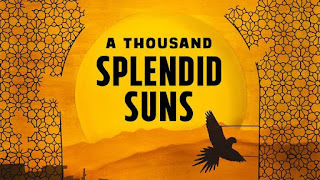 A Thousand Splendid Suns by Ursula Rani Sarma, based on the book by Khaled Hosseini, with original music written and preformed by David Coulter, directed by Carey Perloff, Seattle Repm through November 10.

The Rep begins its season with a tough one - a story of women in the face of an oppressive society, sent against the Afghanistan of recent memory. Based on a novel by Khaled Hosseini of the same name, the play intertwines the lives of two women against the chaos of a collapsing world.

Young Laila (Rinabeth Apostal) loses her home and family in Kabul in a rocket attack. She is rescued from the rubble by neighbor Rasheed (Haysim Kadri), who takes her as his second wife. The first wife, a brow-beaten Miriam (Denmo Ibrahim), does not approve, but has no say in the matter, setting up a very hostile household. This is made worse by the decay of the country as it falls under the sway of the fundamentalist Taliban, and by Rashid's own brutality. The two women must unite in order to survive in a world that has no other allies for them.

It is brilliant performance. We watch Laila age on stage from girl to mother. But , more importantly, we also watch Miriam grow and find for herself redemption and purpose in her life. Their relationship grows as the play unspools and you find both pity for Laila being beaten into the system, and sympathy for Miriam who has become inured to its unfairness (the advice from her mother was - "endure"). For his part, Kadri plays the venomous Rasheed with just enough vulnerability and true believer fanaticism that you can believe him as a real individual (though you still want to take a swing at him - repeatedly).

But the play itself has the far-away, fantasy landscape that makes the viewers happy that they are not in such a world. In "othering" the action of the play, even to real-world Afghanistan, there's a safe distance between Rasheed's society-endorsed, abusive behavior and our own. When I was first brushing up against theatre in college, I noted that plays of abusive families were almost lower class, urban, and usually Catholic. Now we expand it to other continents. The Lovely Bride, for her part, noted the similarities between Suns and The Color Purple, which also puts the perils further away from the audience.

The fantastic nature is enhanced by the stagecraft, which is beautiful. Flying backdrops, lighting which capture the mood, props that move the locations around the actors, the stage is the stark, wild, empty lands that surround Kabul,  from the surrounding mountains to the tight, imprisoning household. It capture the mood of the play, in all its barren beauty.

And then there is the music. This is the first play in some time I remember having live supporting music, in the form of David Coulter, ensconced off to one side with a variety of instruments, including a musical saw, which stresses the alien nature of this world on the other half of the globe. It has been a while that I have seen music woven so tightly into the mood of the play itself.

So, the short form? It is a tough play, hard to watch, and difficult to review. It is also a beautiful performance, rich and deep. Go expecting to feel a little more troubled and thoughtful afterwards.