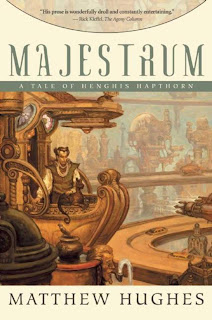 Provenance: NorWesCon, more than a few years ago, This was a rebellion purchase.

I attend NorWesCon, the great Pacific Northwest SF conventions, every few years, when they invite me (when they don't I have no hard feelings, but instead enjoy sleeping in on Easter morning). And whenever I attend, I hit the Dealer's Room, which usually has a couple friends who are repping for their respected game companies. But I also look for books when I am there, and this is what bothers me. There are usually more vendors selling Ren Faire hats than there are booksellers. No slam against those selling leather trilbies, but I feel my nose pushed slightly out of joint by a lack of booksellers at a convention that had its foundation in books. So I picked up both this volume, and its sequel - The Spiral Labyrinth, from the publisher out of sheer spite.

Review: Henghis Hapthorn is a discriminator, a form of far-far-future private detective., making his residence in the trendier sections of Old Earth but having the hundreds of worlds mankind has spread made available at his beck and call, accessible much like we would take a plane to another city. The human presence in the galaxy is old, the moon is gone, the sun is starting to fade. It is not quite Jack Vance's Dying Earth, but it evokes it strongly and intentionally, maybe an aeon or three before where Vance's writings are set.

Henghis comes with baggage in this book, in the form of a collection of short stories that were published by ANOTHER publisher, So, much like Chili Palmer, I have to do some accommodating for stories told before I arrived on the scene. But worse, we keep calling back to those stories all the way through, so that I feel a little pummeled for the crime of not paying sufficient attention back in the '80s when these tales first showed up in the Magazine of Fantasy & Science Fiction.

For example, Henghis's AI assistant has been transformed into a cat-monkey. And Henghis now has an unwelcome boarder in his mind in the form of his intuition, which has manifested as a separate personality in the back of his brain. Both of these come from the fact that magic is slowly taking over the universe, which will replace his logic and rationality with sympathetic association. This bothers Henghis a lot, and he bemoans his fate to them.

That's one of the frustrations in the book - Henghis bemoans his fate a lot.  As he pursues his assignments, he argues with his transformed cat-monkey. He also argues with his intuition as his internal monologue becomes an internal dialogue. The problem is, that it is always the same arguments, drilling down onto the fact that Henghis' rational universe will soon be ending, and he cannot trust his intuition as it literally has a mind of its own.

I look at this one and think about Be Cool, which I slammed for not giving me any reason to support, or even identify, with the protagonist (a protagonist can be unlikable if that is point - even bad examples are examples, after all). Hughes avoids it with Henghis; he is hired almost immediately by an upper-cruster to whom Henghis feels he is morally and intellectually superior, to break up the upper-cruster's daughter's relationship. The fact he does so gets you on his side, a position he keeps throughout the book. However, his continual whinging about the end of his rational age, his upcoming loss to his intuitive self, and his fruit-eating cat-monkey is a bit repetitive.

The book also oversells itself, invoking Jack Vance and Sherlock Holmes.. Hughes' voice is Vancian but not overblown about it. As a Holmesian deductive mastermind, Henghis falls more than a bit short, but he has his moments. It is hardly rollicking and funny, but it is humorous enough to stand on its own merits.

All in all, its OK.  It gets down to cases quickly, and the writing is bright and touches Vance's style and tropes - a formal set of prose and mannered conversations against a fantastic environment. I don't regret reading it, but by the same token, I can go a while before getting the sequel. But it does make me want to read more Jack Vance.