Plague Book: Mansions of the Mind 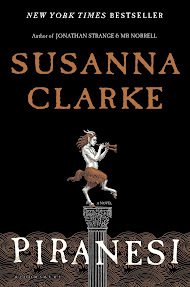 Provenance: A Christmas book. I listened to the audio version of Clarke's previous novel, Jonathan Strange & Mr Norrell, and knew I wanted to read this one. So when it turned up among the usual suspects (NPR, The Seattle Times book page, the New Yorker), I asked the Lovely Bride for it as a Christmas present.

Review:  Piranesi (not his real name, but what he is called), is a simple soul living in a mazework House, which is flooded by the sea. He lives on fish and seaweed. He maps the rooms and tends to the dead bodies he has found there. He does errands for the only other living person there, who he knows as the Other, who is acerbic and looking for the Secret Knowledge hidden in the maze. The House is made of white marble, its halls populated by titanic statues, and it floods on a semi-regular basis from swelling tides.

Is the House real? Or are we trapped inside Piranesi's brain? Are we looking at a demiplane, or at dementia? Mansion or madness? The story unfolds effortlessly and captures a completely likeable and totally unreliable narrator. This is one of those books where you figure things out long in advance of the protagonist, and you are still surprised. You like Piranesi so much that any possible resolution to his situation feels like it will be heartbreaking, but Clarke manages to navigate the shoals of emotion neatly and gives you a satisfying conclusion his tale.

I wiki'd up Piranesi, since the name itself meant nothing to me and there was no obvious reason for it presented in the text (there is a reason in-text, but you have to think about it). Giovanni Battista Piranesi was an archeologist, architect and artist who is best remembered for his black and white etchings of ancient ruins and wild, phantasmal vaults and prisons. Knowing this gave me another, but exact view, of what was going on Piranesi's world. Ultimately exactly what is going on in this fantastic landsacpe is theorized but not entirely defined, and that leaves it magical in its own right.

But let me talk briefly about the book as artifact.. There seems to be a new trope in book packaging regarding "serious" fantasy books - matte black covers with metallic ink. We saw it over on Circe and here it is again - Embossed lettering, copper ink, singular image, and a lot of empty black space. And hey, there's a blurb on the back cover from Circe's author. Though it is from a different publisher, it does feel like it is same design house. And it sends its own messages about the contents (This is "serious" fantasy). Authors do not always select their covers (and often do not have a say it such matters), but yes, if I were to deliver some "serious" fantasy, I would go for black and copper as well.