Plague Book: In the Blood 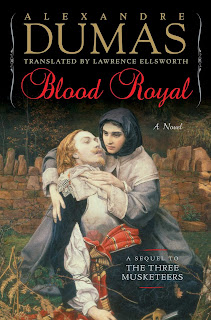 Blood Royal, or, The Son of Milady by Alexandre Dumas, Edited and Translated by Lawrence Ellsworth, Pegasus Books, 2020

Review: These books have quickly become mental comfort food. I had read an excellent translation of the Three Musketeers long ago and far away, but fell into the Ellsworth translations with the Red Sphinx and kept coming back. Ellsworth is better known in gaming circles as Lawrence Schick (D&D module S2 - White Plume Mountain, among other things), and his spirit of adventure carries through here in his translation.

This volume is the back half of the original publication of Twenty Years After, which originally appeared as a serialized novel. In it, Dumas deals with two different civil wars - one in France called the Fronde, and the English Civil War. In the first half, the four inseparables are separated through loyalties and responsibilities, Mordaunt, the son of Milady plots his revenge, and two of the group (Aramis and Athos) debark for England to help King Charles, on the ropes from Cromwell's revolution.

We pick up this volume with D'Artagnan and Porthos also heading for England, with instructions to help Cromwell and assigned to aid  Mordaunt, who plots all of their demises. They soon switch sides and work to save King Charles (noble but doomed), who had been betrayed to Cromwell's forces.

And here's the thing: they have to fail (spoilers). Historically, Charles was beheaded (real spoilers), and while Dumas will be kinda fast and loose with the facts and timelines to suit his fiction, he cannot keep the King of England alive. So we have a long section where the crafty Gascon (D'Artagnan is given that sobriquet a number of time) comes up with a plan that just ALMOST works, before time or fate or the presence of the Son of Milady foils it at the last moment. Mordaunt pops in a number of times,and the crew also fails to dispatch him, and ultimately the group has to flee England in a boat rigged with explosives.

Back in France, the four split up, and D'Artagnan and Porthos are imprisoned by the current evil cardinal (Mazarin, not the ruthless but effective Richelieu) for trying to save the English King. Athos and Aramis witness the machinations to overturn the revolutionary Frondeurs by splitting off its various factions, but rescue D'Artagnan and Porthos, and get enough leverage to get what they themselves ultimately want (which is not what the revolutionaries were after). It all ends in a riot, much as it began in the previous volume.

D'Artagnan is no longer an innocent, but is crafty and the man with the plan throughout this book. Porthos lusts after his peerage and respect, and is the most broadly-fashioned of the group. Aramis is the Sexy Priest, only moreso. Athos has in my brain changed over the passing of 20 years - the fact that he has a son (who will be more important later) has made him more of a worrier and fretter, both on behalf of his son and in general. That son in turn sort of vanishes in this volume, after a good start in the previous volume.

The swashbuckling is hard and heavy, ranging from battlefield maneuvers to very D&Dish duels, and in one section, a dungeon exploration. Dumas reserves his sharpest tongue for the politicians of all shapes and factions. Queen Anne of France is sleeping with Cardinal Maturan, who is more comic and less capable than his predecessor Richleau. The upper class leaders of the Frondeur are easily bought off by the Monarchy. The former valets of the Musketeers have established themselves with the greater society, to a variety of effects. All have their moments, but the center of the action are on the four musketeers.

Yeah, I'm bought in on that. There are three more volumes to come, which make up the Vicomte of Braelonne series, which ends in The Man in the Iron Mask. Yeah, I'm going to be there for them.