Book: Four of the Three Musketeers 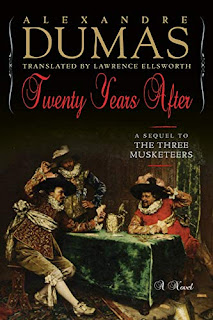 Provenance: Christmas present from the Lovely Bride. I had read the predecessor book, The Red Sphinx (written later, but inserted into its proper place in the timeline canon - Hey, if you can sort out all the Star Wars films, you can handle that). It is part of taking The Three Musketeers and turning it into its own Expanded Universe.

Review: Let me give you the bad news first - this is not the complete novel of Twenty Years Later. It is about half of it, setting up all the pieces and sending its characters all over the place and setting up (hopefully) threads that will resolve themselves later. The publisher does not do a very good job indicating this, other than a mention in the Editor/Translator's intro and the sudden announcement at the last chapter that "The Story Continues in Book Four - The Son of Milady").

And you know what, that's OK. Dumas originally serialized these stories in Parisian Newspaper, Le Siecle - The Age), So the initial assemblage was of a thing of pieces. And, given its serialized origin, the final work is sprawling and over-sized - this first half of the story runs about 450 pages, including front and back matter, and a complete version might be larger than the doorstop that was the Red Sphinx.

The original Three Musketeers was a smash hit, yet when the sequel showed up, it was a bit puzzling. Instead of picking up with our heroes immediately, Dumas went, well ... 20 years after. That's a easy thing to do when you're doing historical fiction, since you have the general gist of things, though Dumas played fast and loose with the timing of historical events and the ages of the characters through-out (His audience did not have a Wikipedia to check things, and an Internet upon which to complain about them).

So. twenty years after the events in the first book.The band of Inseparables has separated. D'Artagnan is still with the King's Musketeers, but Aramis has become a priest, Porthos married into the landed gentry, and Athos is a Count as well. King Louis XIII is dead, and the Prince, to be Louis XIV (The Sun King) has not yet attained his majority. Cardinal Richelieu is no more, and his replacement is Cardinal Mazarin, more of a greedy bumbler who makes the previous Cardinal look more godlike (as noted elsewhere, Dumas really liked Richelieu, though most American versions present him as a bad guy).

Mazarin summons D'Artagnan to put the band back together to deal with a would-be rebellion from the nobles and bourgeois. This rebellion, known as the Fronde because of the slings used by the rebels, was centered on the bourgeois and bureaucracy, but supported by the more powerful nobles and the usual suspects of other potential heirs to the throne. D'Artagnan accepts, but discovers that not all is well with his former comrades. Aramis, now a priest, is on the side of the Frondeurs, and is sleeping with one of the ring-leaders. Porthos has land but no respect from the other gentry, and wishes to become a Baron. Athos, previously known as a drinker and a cynic, has cleaned up his act and dotes on his young protege, who is not-so-secretly (because everyone except the young man realizes it) is Athos' illegitimate son (through a turn of events which is pretty damned wacky).

And that son, Raoul, quickly takes over the book. D'Artagnan disappears for about 100 pages towards the end of this installment, and his absence is not noticed, as the pages are filled with other characters. The former servants are back, now in different ranks and lives since 20 years ago. Raoul gets a traveling companion of similar status in the Comte de Guiche. And the son of Milady, Mordaunt, comes into play as the chief bad guy, in the service of Oliver Cromwell (England is having a Civil War as well at this time, though bloodier). This half of the book ends with Athos and Aramis heading for England with Lord Winter (brother of Milady's second husband) to help Charles II while Mordaunt taunts them from the jetty.

What I find interesting is that, with age, the Inseparables are plagued by their doubts. They have been on the wrong side of history before, aiding the Queen and opposed to the King in the matter of the Queen's Necklace, and now they must admit that Richelieu was a great man (even if they opposed him years before). And their trial and execution of Milady at the end of The Three Musketeers is coming back to haunt them in the form of her child, who is evil, but evil-with-a-justification.

The text is lively and engaging and captures the swashbuckling nature.  Ellsworth de-bowdlerizes earlier translations of the Dumas text, and restores a "lost chapter", which features none of the main characters, but rather a member of the Frondeurs that is almost ridden down in the streets by D'Artagnan. Said mild-mannered revolutionary goes home, but the result of his encounter brings a mob of supporters and more and more powerful visitors (with their attendent doctors) to his house, resulting in an aristo version of the stateroom scene from A Night A The Opera. And it is the little bits like this - the dinners and the conversations and the small scenes, that really move the plot along nicely.

So, yeah, half an oeuvre is better than none, and I look forward to the resolution of this translation. Yeah, I can get it in more complete(ish) form elsewhere, but I will wait for this one.