Theatre: Who's Afraid of the Toxic Male? 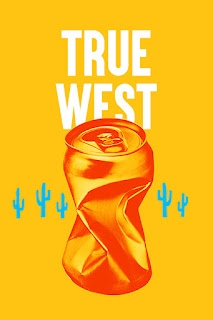 Well, that was cringeworthy.

I really want to just leave it there with a Twitter-friendly put-down, but I can't. True West is one of those plays that makes me question if I am capable of understanding theater, or at rather theatre. You've seen me tilt at this particular windmill before - plays that are Pulitzer-nominated (like this one) or Pulitzer-awarded that just leave me scratching my head and asking "Why this one?" What makes this a brilliant play? Why do people like this?

Because I'm not getting it.

Here's the shuffle and deal - Austin, a screenwriter (yes, it's another damned play involving a writer), is house-sitting for his Mom while he's in LA to do a deal on his new project. His older brother Lee, a drifter and petty thief, arrives. They don't like each other. Lee gets the movie deal with a horrible but earnest idea and a lot of BS. Austin is broken by this turn of events. By the time Mom gets home, they have trashed the place with their arguing, which turns violent. Toast is involved.

It IS billed as a comedy. which means it has funny moments. But a lot of them are that "uncomfortable funny" of personal humiliation.

Lee is a bully and a thief. Austin is a milksop. The first act is pretty much Lee abusing Austin verbally and Austin just taking it. Then in the second act, after Austin breaks, he gets to turn on Lee, who, while he can hustle a deal, can't really write. The play consists of looping arguments that don't seem to go anywhere, except to provide ammo for future arguments.

And the set is a well-appointed Southern Cali bungalow with a too-big kitchen. Which gets trashed.

It is a play that uses a lot of blank space. Conversations are cut off or just trail off. Lots of pregnant pauses. Blackouts to show there has been time passed. At intermission, the lights came up, and no one in the audience moved. There was nothing to build to that moment to cue them. No cliffhanger. No rising tension. No indication that now is the time you should go urinate.

And in the end, there is no resolution, just another blackout. The play could have ended five minutes earlier or five minutes later. It doesn't matter. It is a comedy in that funny things happen. Not a comedy is that it doesn't have a positive outcome. The Revolutionists was a curious play for me that redeemed itself in the last 15 minutes. This one, not so much. And it left me angry.

The Lovely Bride and I don't share our views usually right after the play, instead walking to the car and making small talk (we have voiced opinions publicly before, and had strangers join the conversation to argue with us). This time was particularly frosty because the play was just upsetting for no good reason. Two hours of toxic masculinity that makes you want to slap the protagonists with a golf club by the end and yell at poor drivers on the way home. No lessons learned, no larger point made.

The Lovely Bride and I came home and she made toast. So there's that.