Comics: End of the Collection

Those who know me may be in for a bit of a shock: I have gotten rid of my comic book collection.

To call it a collection would be rounding up. It is more of an accumulation, forty-plus years of paper and staples that had been acquired, read and deposited in long white coffins, to rest in state in various locations. Most recently that location was a small room billed optimistically by the realtor as a Mother-In-Law apartment (When my Mom-In-Law stayed with us, she got the guest room - much nicer).  When we first moved to Seattle, the Lovely Bride built a storage rack for the collection, four bins wide and two bins high, each bin holding 9 "long-boxes" of comics, each long-box about 30" long and holding about 300 comics easily (or 350 the way I would jam them in). So that is, what, 72 long boxes with a total of about 2.5k comics.

I read comics as a kid. Harvey comics like Sad Sack and Hot Stuff the Little Devil. I read DC comics, which were better than Marvels because you could never guarantee you would get the "next issue" at the drug store, never mind that a sizable chunk of the DCs were reprints from the early fifties. Original works included Dial H for Heroes and Legion of Superheroes and Superman's Pal Jimmy Olsen. I think I had the first issue of Luke Cage, Hero for Hire.

Then I stopped, showing a preference for MAD magazine as my drug store read. The old comics, disposable culture, were disposed.

In college I got back into comics. I blame the Star Wars comic and Howard the Duck. The guy in the next room over at the dorm read super-hero comics (Hi, Joe!) and I started reading the Fantastic Four and Iron Man. The story about creating a superhero RPG from alL this can be found here. I stored the comics in the bottom drawer of my dresser in the dorm, and brought them home in grocery bags.

Out of college, I started picking up books regularly, and started storing them in "real" long-boxes. In Pittsburgh, the only direct-sale shop was on the North Side, Eide's, in the an area where urban renewal had not gotten around to renewing yet. There I found the Small Press Indies - Elfquest, Cerebus, and the like. The boxes started to pile up. When I had gotten them to about 3 by 3, I put a sheet of plywood over them and made them into a desk. The boxes were not bleached white yet, and while I was bagging I was not boarding them (and never would). 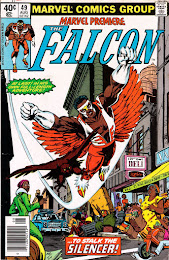 The story of how Marvel Super Heroes came about at TSR is here (again) But the upshot was not only was I using my collection as a resource, Marvel was now sending me comics on a weekly basis. I got on their mailing list and got two copies of everything. One copy went into manila folders and was circulated around the office (for "research" purposes) while my own copy went home. We were now storing the comics in an attic crawlspace over the kitchen. The LB and I would drive up to Milwaukee to the Turning Page every other week on a Friday (then comic-book day), then go to Chi-Chi's at the mall for Mexican food  (table for two, good light source, please).  Eventually I went for weekly runs to Rockhead's in Kenosha, and finally a pair of fans started carrying comics at their video store/gas station in Lake Geneva.

About that time I was writing comics for DC (Story here) and got on THEIR mailing list, so I got a lot of comics coming in. And in the process of all this I got a lot of comics that I would never buy, like Barbie, and movie adaptations like Richie Rich and comics for Kiss, Alice Cooper, and Prince. And I got a lot of exposure to their full lines - Vertigo and Epic and Milestone. Some was very good, some was forgettable. I made a culling and got rid of four boxes at a shop up in Madison.

I no longer am on those mailing lists, but the accumulation continued. The brown boxes became large white boxes. I stopped bagging, and eventually I stopped sorting, instead just stacking. The boxes became time capsules, layered like strata of popular culture. I brought the collection to Seattle, and the LB built the storage bins. I filled up about half of them, but over the years they filled up, and there were a couple extra white coffins on the floor as well. The boxes got wider (to accommodate the backing boards I don't use), and the paper stock for comics has gotten heavier and glossier. A box of old newsprint was about 50 pounds, one stuffed with recent books was more like 70. Soon, I would not be able to move them again. They became a wall of paper, and I considered that, in case of a nuclear attack, I could build a fallout shelter with them. Viking funeral also came to mind.

And so it was time to get rid of them. Needed the space, and the necessity of keeping them for research had diminished - not only was I not designing RPGs, but a lot of the material was available through trade paperback reprints and online. And the fictional universes have rebooted multiple times, with a surge of destructive fury replaced by a flurry of number ones, so their usefulness as historical records was diminished.

And I went through them all in the process of cleaning them out. Some we kept - Kate had some we wanted to keep - Starstruck from Epic and Jonny Quest from Comico and Power Pack from Marvel and the underappreciated Baker Street from Caliber (punk Sherlock Holmes). I kept Astro City (Various publishers), Planetary, Groo the Wanderer, and the various Handbooks, Who's Whos, and Secret Files. And multiple  all the stuff I worked on over the years, with the exception of a backup story for a TSR comic that set up the story and then was cancelled that issue.Going through them was like an archaeological dig. Newsprint gave way to glossy stock throughout. There were flurries of relaunched and renumbered Number Ones. There were stunts like  chrome covers and embossed covers and wordless issues and sideways printing, and even a couple three-D's. There were books that I don't even remember reading - Xombi and Ravage 2099 and Hokum & Hex and Leonard Nimoy's PriMortals. Sublines like Razorwire and Heavy Hitters. And most recently mega-epics that swallowed entire company lines with huge epic storylines.

And I'm done. Those we did not keep I took down, four and five boxes at a time, to the Page Turner, a thriving used bookstore in Kent, Washington (Online it can be found as Hasberts.com). The store has an excellent collection of comics, genre fiction, histories, and pop culture. I pulled out the black and white indies (which the store owner said didn't sell well for him) for a friend (and stored them in brown paper grocery bags). The last load went down this weekend, in celebration of Seattle's Independent Bookstore Day/Week. So far I haven't had a shred of seller's regret. Now the bins are stacked with plastic containers filled with sewing projects and old paperwork belonging to my late mother-in-law.

I still read comics, but I doubt I will be hoarding them. Maybe it is time to look at electronic formats (which, oddly enough, may make the print comics of today more valuable in that there will be fewer of them, much like the paper drives of WWII boosted the disposal of old golden age books). It does feel like I have jettisoned almost two tons of albatross from my life.

Now I just need to figure out what to do with all these National Geographics.