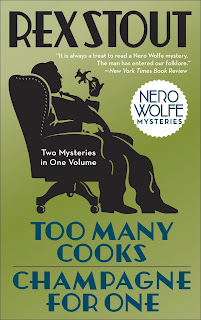 Provenance: Purchased at the Strand, New York City, in the before times. I had gone to the Strand to look for the new Will Gibson book, but they had sold out. But I did find this one.

Recently, I bogged down with three rather involved tomes, so when I went in for my shot, I took this book along. Didn't really need it, but once started, I spent several pleasant spring afternoons on the back deck reading it.

Review: This is a reprint compilation - two books, twenty years apart, shoved together under a single set of covers. No additional editing, and it shows. The first book runs its course, and the second begins with new page numbering. The fonts and leading are different in both halves. There's a big globby typo on page 104 of the first story that is still there. So the effort on the 2009 reprint consists of new covers and printing.

What it does do is that it allows us to compare two books, same author, same characters, same general setup, twenty years apart and eighty years back in time. Yes, there is some creakiness involved, but in general, they hold up.

(OK, for those who haven't heard me talk about this before, here's the overview of the series: Nero Wolfe is a brilliant, overweight, cantankerous private detective with a superiority complex and preference for fine food, orchids, and not working. Archie Goodwin is his legman. employee, and friend, the wisecracking Watson in this pair, but more social and more street savvy. He pushes, goads, and otherwise manipulates Wolfe into doing the right thing as part of his job. Together they're detectives.)

So, Too Many Cooks. Here Wolfe is out of his element. He is going to a gathering of professional chefs in West Virginia to give an after-dinner speech and enjoy the food, and maybe get a secret recipe from one of the chefs. One of the chefs present is one of those guys who everyone says deserves to be stabbed. Yeah, he is stabbed. So, large crowd of suspects, Wolfe having to do things he does not want to do, Archie is being charming and flirtatious, but with a heart of gold. Even at this early date, a lot of the components of a Nero Wolfe story are pretty much set in stone.

An interesting exception deals with race. Up to this point, I hadn't considered how white Wolfe's world is, but in this case a major set of witnesses at the resort in W Va are black men. Despite being set in New York, a lot of the people who Wolfe is dealing with are Caucasian. Some of that is dealing with the Upper Class, his clients, but also most of the day-to-day that Archie runs around with - cabbies and doormen and receptionists. There is a variety of European heritages - Italians and Irish and Polish and French, and Wolfe himself is Serbian. But these would fall under the ancient rubric of "White Ethnic", a phrase I don't think I've heard since 1978 (Its flipside would be WASP - equally extinct in the modern age, even with a recent failed attempt to resurrect it as simply "Anglo-Saxon")).

But we are in West Virginia for this tale, and black men are the resort staff. They cook and serve the food. They hold the doors. The help. They are made semi-invisible by the shade of their flesh. How does Stout handle it? Casual N-bombs are thrown in the text, but not by Archie or Nero, though Archie does use a few archaic epithets that I had to look up. When confronting the staff as potential witnesses to the crime, Wolfe delivers a "Brotherhood of Man" speech that borders on cringe-worthy to modern ears, but Wolfe pulls it off in part because of his own insufferable superiority to everyone regardless of race or creed. And Stout's characterizations of the African-American staff are better than most films of the era, and he makes clear why the staff would be unwilling to cooperate with the white establishment, regardless of where in Europe those ancestors came from.

Champagne for One also involves a hot topic of its time - in this case unwed mothers. Up to the mid-70s, there were "schools" that would take pregnant unwed mothers in, see them to term, provide varying levels of support and putting the children up for adoption. The lessening of stigma about teenage pregnancy did a lot to reduce their popularity and the rise of birth control, but they are at the heart of this part of the mystery.

The setup for this one is a bit stilted, but bear with me. Widow of the founder of one of these homes continues her late husband's tradition of inviting three of the women from the school (post-birth) and three young men (of upper middle class) to a dinner at her mansion. At this particular one, Archie is leaned upon to fill in as one of the young men. One of the women, who had told people she kept poison in her purse in case she decides to do herself in, is poisoned. Everyone assumes it is suicide, but Archie goes on record as saying it is murder. And that eventually brings Wolfe in.

And here, twenty years later, the formula is firing on all cylinders. We have the brownstone on West 35th street. We have the supporting cast, both household and professional. We have the cigar-chomping chief of detectives, who lives in the pantheon with Piroit's Inspector Japp and Holmes Lestrade as foils and frenemies. We have the big cast of upper-class suspects, who pack their own secrets and agendas. That last is definitely a Stout trademark - the murder is not frozen in amber, but rather the players continue to conspire and plot as Wolfe closes in. But the setting and action is comfortable, right down to the red chair in Wolfe's office. Are these "cozy mysteries", a term used for rural sleuths like Miss Marples? Yeah, I can see it. Comfort food with a little murder on the side.