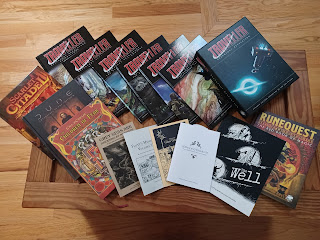 So, games continue to arrive. Some are the result of Kickstarters that have come due, but some are outright purchases off the shelf.  I have read parts of some of these, and have played absolutely none of them, so these are hardly reviews and more akin to first encounters. Be advised.

Traveller: Deepnight Revelation (Martin J. Dougherty, Mongoose Publishing) This was a Kickstarter that grew like kudzu. Originally a boxed set for Mongoose's incarnation of Traveller, the campaign went so well that they just kept adding supplements, so there are six (!) hardback books attached to it by the time it arrived. The idea is that you take an exploratory starship on a 20-year(!) mission to the edges of known space and beyond in search of a potentially cataclysmic opponent. This would be a year's worth of a small company's production and several years worth of gaming and in addition to everything else the boxed set has extensive rules on running a long-term exploratory mission. However, it wrong-foots me at the start, in the fact that I can't figure out exactly how I know where the cataclysmic opponent is. It seems to just be assumed your players will have that information at hand at the start, and even the intro adventure presents the threat but does not make a hard link to the distant system to you are going to. even so, it is so otherwise complete I would strongly consider it if I chose to return to Traveller, or adapt it for a d6 Star Wars game.

Scarlet Citadel: A Dungeon of Secrets (Steve Winter, Kobold Publishing). This 208 page hardbound is a nice Kickstarter dungeon that was offered with a fully laid out map folio. I didn't get the folio, and if you intend to run this adventure, yes, spring for the map pack. In addition to having full-size playing maps for miniatures, the pack has overlays for how the dungeon changes as the players explore it. The dungeon itself has an attractive history (Sorcerer's Fortress), a reason for the creatures to be there, and, what I like most of all, is a dynamic creation, so things you do in one area affect other encounters (None of this "you hit three rooms and the fourth room is still waiting for you to come in"). Steve Winter is my regular 5E DM and I see parts of what we've been running through peeking out here and there.

The Red Book of Magic (Jeff Richard, Greg Stafford, Steve Perrin, Sandy Peterson and more, Chaosium). Hardcover, 126 pages. Runequest is my personal tsundoko - having more books than you ever are going to read, or in this case, games you are never going to use. I find Glorantha fascinating, ever since White Bear/Red Moon, and have followed Runequest through its many incarnations (including the AH version and HeroWars), yet never played the RPG. This volume is primarily a spellbook on spirit magic, gathered from many previous sources and brought up to date, and, like all of the modern Runequest material, looks impressive.

The Well (Peter Schaefer, Shoeless Pete Games) 120 pages squarebound. This Kickstarter was recommended to me by a friend (OK, Steve Winter, see above) who worked with the designer at Wizards of the Coast. The concept is compact and neat - You live in a city that is moving slowly down a great well. Below you is mystery, above you are the remains of your past. You go raiding into these past remains in traditional dungeon style, but your enemies are reassembled dead and cleanup crew. New mechanics looks good.  Once upon a time TSR was hot on the idea of a "reverse dungeon" - here you go. Yes, I want to play this.

Dune: Adventures in the Imperium  (Nathan Dowdell, Design Lead, Modiphius Entertainment) Hardcover, 330 pages. I still think the original Dune was a fantastic work of SF, and re-read it every so often. Like Lord of the Rings, its prose has the ability to suck me back in almost immediately.  But I will be honest, the series for me peaked with Children of Dune, and then sort of trailed off from there, and I never engaged with the canonical books after Frank Herbert's passing. This one was in my Friendly Comic Book store, and I was stalking it for several weeks before I made the plunge. The book itself is textually dense, first-class production, though can't yet speak to what the mechanics (a 2d20 system) are like. Impressive.

Seance and Sensibility (Finn Cresswell) 60 pages, saddle-stitched, self-covered. This one came with an apology (it was more than a year late, dating back to the PREVIOUS Zinequest) and  the designer included a slip apologizing for its lateness. No apology necessary. I consumed this simply-crafted booklet in one sitting, and emerged for the first time how the Powered by the Apocalypse Engine should work. Other PbtAE volumes should take note. The theme is Jane Austin fights cultists. Worth tracking down.

Tales of the Glass Gnomes (Noet Cloudfoundre) 26 pages, saddle-stitched cover. This is an entry from this year's Zinequest on Kickstarter, and is pretty charming, reminding us of the ultimate roots of such personal projects. It has straightforward production values and art that could fit into the original D&D wood-grain box. It presents a new culture for you gaming enjoyment that is not your standard gnomes. Worth looking at.

The Children of Fear (Lynne Hardy and Friends)  This 414 pages hardbound is the latest Call of Cthulhu hardbound, set in Tibet, Northern India, and the interior of China in the 1920's and involving the conflict between the mythical realms/cities/factions/entities of Shambhala and Agartha. While I admire the updating and reissuing of classic CoC material (Masks of Nyarlathotep, Horror on the Orient Express), it is really, really good to see new original material of this quality.  Picked up both this volume and The Red Book of Magic At Olympic Card and Comics down in Lacey. OCC (also know as Gabi's) has a lot of deep stock in RPGs and carries a bunch of indies and small press that might not otherwise see the light of day. Every three-to-five months or so, Stan! and I make a road trip down there, get lunch somewhere in Tacoma, and make a day of it. Products like this make the trip worthwhile.

Flott's Miscellany Vol. 2 ((Andrew Devenney and others, Superhero Necromancer Press) 36 pages, saddle-stitched cover, This is more of the same amusing material I had in Flott's Miscellany Vol 1, which in turn was based on the Rainy City. It has a lot of bits and bobs that can be slotted into a campaign, with a rather wry, Dying Earth (Drying Earth?) sort of vibe. I like it.

Grey Seas Are Dreaming of My Death (Derek Sotak and others). 108 pages digest, squarebound. This one missed the class picture last time, so I thought I would show it off here, in case you find a copy at the Local Game Story, or elsewhere. If you do, pick it up.