Book: Back in the Saddle 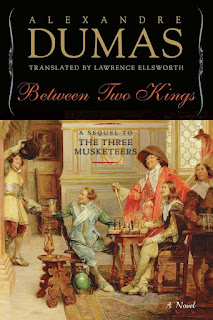 Review: Everyone knows The Three Musketeers. Most people know The Man in the Iron Mask. But between these two posts were a slew of other tales, first those within Twenty Years Later (talked about here and here) and now those within Ten Years After, also known as the Vicomte of Bragalonne. This particular volume is the first 50 chapters of the latter book, which culminated in aforementioned The Man in the Iron Mask.

So were this a simple trilogy, this would be the "saddle" book, the one between the declaration of the problem in the first book, and the resolution in the third. But these stories of the Three Musketeers were not built as such - they were written for publication in weekly journals starting in 1847, so they are a long as they need to be. The volumes of collected work are after-market sales. And it shows - it takes its time getting places, characters can be delayed or engage in chapter-long discussions, and the pacing rolls from action-packed to leisurely. It does pose a challenge for people collecting up the stories into something less than a single massive tome. Yet every chapter holds its own as a unit and encourages the reader to follow along. Translator Ellsworth captures the flavor, flair, and completeness of the original French manuscript.

This first volume concerns itself primarily with the Return of the King, in this case King Charles II of England. Yes, we're back in England, again. We presided over the death of Charles I in Blood Royal, as the heroes were unable to completely contravene history, and now Dumas plays a bit fast and loose with the facts, making his heroes key to restoration of the monarchy. D'Artagnan, still a lieutenant in the Musketeers, has had enough of the young French King, a particularly emo Louis XIV, and strikes out on his own with a scheme to restore Charles to the throne and make a tidy profit for himself. Athos, who was the recipient of Charles I's last words, encounters the son and pledges himself to help restore the young man to the throne, powered by the sense of noble duty. Porthos and Aramis are missing from this text, except for chapters where D'Artagnan goes looking for them and finds out they just left.  Even Athos' son, the Viscomte named in the original title, is mostly absent for the first fifty installments.

Athos, who was a bit of a wet mop in the previous volume, shines here through his own nobility, honesty, and generosity. The same attributes that worked against him in Blood Royal (trust, respect, duty) now prove to be indispensable. He is respected by his potential enemies and taken at his noble word continually. D'Artagnan is more comic than usual, still very much the farmer from Gascony after all these years, and talks himself into (and out of) various messes. Ultimately, each man has his own screwball plan, and together, the plans work. But this is really Athos' book,

The Royals in these tales are generally useless. Louis XIV is kept inert while his Prime Minister, Mazarin, backed up by Louis's mother, Queen Anne, pretty much run things. Charles of England is impoverished and depressed, lacking both cash and manpower to retake his throne. Anne herself, whose diamonds drove the plot of the first book, forgets old allies and servants with alarming precision. Henrietta of Stuart, Charles II's younger sister, was horribly impoverished in the previous book, but after restoration she becomes a coquettish tease. All the rest are pretty unsympathetic, courtiers just waiting for the chop a hundred years later.

Of more interest to Dumas are the powers behind the throne - Cardinal Mazarin for Louis, and General Monck for Charles. They are the ones that our heroes mostly contend with. Mazarin is effective but venal and greedy. Monck is honorable, such that he takes Athos at his word, and throws in with Chalres when the young King impresses him. Throughout the books Dumas was a fan of Richleau and his ilk, not so much Louis XIII, and it reflects in his treatment of the true managers of state here.

What strikes me most as I move through this book is how in politics people switch sides with frightening regularity. Enemies from the Frondeur are now respected members of the court, and old alliances and services rendered are conveniently forgotten (yes, I'm looking at YOU, Queen Anne). It is very much a case that you need a scorecard to figure out who is currently plotting against who, which Ellsworth kindly provides in extensive footnotes and historical bios.

This volume is just the first 50 chapters of a 268-chapter story, and while it tells a coherent story, it is all warm-up for the main acts to follow, wrapping up some of looser ends from the Twenty Years After and introducing some of the new cast going forward. It breaks at a correct moment, and sets us up for the what follows. And yeah, I'm here for the ride.