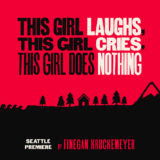 This Girl Laughs, This Girl Cries, This Girl Does Nothing by Finegan Kruckemeyer, Directed by Johamy Morales, Arts West, through 10 April.

Another expedition to the Hermit Kingdom that is West Seattle. Last year, the main span to that region from the mainland was shut down, forcing traffic to approach by lesser roads from the south. This particular trip we did not get lost, but the traffic was slow and jammed along those routes. However, we had an excellent meal at Mashiko Sushi (tuna tartar, grilled squid, and the Lovely Bride's favorite, spider roll (actually a soft-shelled crab)). Then the play itself, just next door.

How was the play? I liked it a lot. The LB felt it lacked depth and gravitas, and was more suitable to children's theatre, and indeed both the award-winning writer and director have serious chops working with young audiences. But after musical plays, improv rap, and blocking set dressings, I was ready for a simple, straightforward play, and I thought it was great.

The play itself is as linear and as convoluted as a faerie tale. There are three sisters, triplets at birth, identical but different. Their mother dies, their father remarries, the stepmother is of the evil variety and (it is supposed) commands the father to lead the children (Age 13) out to the forest and abandons them. The sisters are distraught and go their separate ways into the wider world. One goes East and has adventures. One goes West and has adventures. One remains in place and has adventures. Eventually they come back together, both united and changed.

And it works. I complain about actors who have to fight with tough material, who are visibly struggling with the lines and characterizations. Not here. The ensemble grasps, internalizes, and conquers their world. They dance, sing, laugh and make the world a living and (mostly) pleasant place. The roles are broad and yes, it is a fairie tale, a fable, a simple thing, but they nail it.

The company is great and many of them are making their first appearance on the ArtsWest Stage. Mara Palma, Bella Orobaton and Lola Rei Fukushima are the triplets, who sell their unity and their differences wonderfully. Anjelica McMillan has the quicksilver ability to shift characters, ages, and genders smoothly and effectively. Tyler Campbell is equally versatile as heartbroken father and a very unpleasant badger. All fill in the other roles and encounters that the daughters encounter, effortless dropping one guise and taking on another.

And yeah, the set works this time. a collection of 20-odd stools, tables, trunks (with additional props within) and a ship's wheel are transformed and re-transformed through the play. The stick is a cane. The stick is a sword. The stick is mixing spoon. The props are just tools in the hands of capable actors.

So. A wonderfully pleasant play delivered by talented and capable actors. An excellent evening. And yes, if you have daughters, this is a great play to take them to (most of the Friday evening house was traditional mix of middle-aged local supporters and some folk in their 20s). A good yarn, with excellent actors. A nice fable. Worth seeing.