This Just In: Attack of the Tchotkes 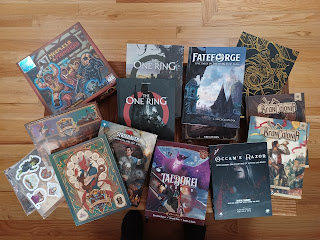 A lot of stuff has arrived at Grubb Street over the past few months, as Kickstarters resolve and the global supply snarl continues. Many are late, but not horribly so. But because of the nature of Kickstarters, a lot of them have extra STUFF attached to them. Counters. Plastic miniatures. Separate maps. Bonus Booklets. Pdfs (not shown, of course), STLs (3D printer stuff). Art prints. Dice. Stickers! And all these components they have a nasty tendency to go walkabout once they are sprung from their original containers.

And to be honest, while all of this is nice, I just want the book most of the times. Unless the maps are a vital part of the adventure, don't send them separately. Yeah, we had this problem going all the way back to TSR, which was one reason to shrinkwrap everything back in the day.

Anyway, here's the current haul. These are not reviews as much as "Received and Flipped Through"

Meeples and Monsters - (Ole Steiness, Designer, Paul Grogan Rules, AEG, Two inch deep box) This was a Kickstarter, and I don't do a lot of Kickstarters for boxed games, primarily because it is a high risk factor as to if I'm going to like it. The original Kickstarter did well enough to include an expansion in the shipment, and as such the box is over-full (hopefully it will be less clogged when we punch everything out). The game itself is themed around raiding different types of troops to defend a town against monsters. A lot of mechanics echo other games (Lords of Waterdeep, Alhambra). Looks interesting.

The Seeker's Guide to Twisted Taverns - (Logan Reese, Lead Designer, Eldermancy LLC/Ghostforge, 320 page Hardback). Seventeen fantasy taverns that cover just about every fantasy genre you want to hit. We've got elven taverns, dwarven taverns, creepy taverns, Asian-themed taverns, Arabian Nights-themed taverns, underwater taverns, and dream taverns. We even have a traditional Tolkienish tavern - "The Dancing Horse" . Complete with staff, menus, maps, and adventure hooks. Came with stickers and a map pack, and a separate map for an additional tavern that was added as a stretch goal. Trying to try to keep it from being scattered through my office.

Strixhaven: A Curriculum of Chaos - (Amanda Hamon, Lead Designer, Wizards of the Coast, 224 pages hardback). Picked this up at the Page Turner, a nice used and new bookstore in downtown Kent with a lot of genre material. The book is Harry Potter strained through a Magic:The Gathering card set. As such it represents the versatility of the 5th edition, where everything is NOT going down into the dungeon and taking stuff from evil creatures. It is not my brand of playing, I will admit. The Lovely B, however, has been running adventures of a modern magical academy on one of the islands in Puget Sound, so there is a genre to be supported here.

The One Ring: Roleplaying in the World of The Lord of the Rings - (Francesco Nepitello, Lead Writer, Free League, 240 page hardback) Is a Free League operation, so it means it is a luscious-looking volume of thick paper and beautiful art. Has a new system to learn which uses d6s and d12s. Came with a Starter Box set with condensed rules, character sheets, full map of the shire, and adventures, among other things. Also included in the Kickstarter were customized dice sets, which they got slightly wrong and have to send NEW dice sets. Oh, well.

Fateforge: Epic Tales in the World of Eana, - Creatures (Joelle "Iris" Deschamp and Nelyham, Editorial and Conception, Studio Agate, 416 pages) and Encyclopedia (Joelle "Iris" Deschamp and Nelyham, Editorial and Conception, Studio Agate, 360 pages) These are books 3 and 4 in the series (1 and 2 are the worlds' Player's Handbook and DMG), and were ordered separately on Kickstarter, but arrived with all manner of additional material. Art prints, maps, an adventure by Ed Greenwood, additional booklets, pdfs, stls, and miniatures. They are very hefty and impressive, but I prefer the Encyclopedia to the Creature book. The former is a worldbook for the campaign, while the latter, while containing new monsters and fitting old ones into their ecosystem, uses stats direct from the Monster Manual's SRD. On the other hand, why reinvent the wheel if you're going to use ogres and minotaurs and tie them into your cosmology? Also a challenge for Creatures is that they split them up by biome and geography as opposed to a straight alphabetical run, so finding that particular monster may be a challenge. On the plus side, with all the additional material, they provided a stylish BOX so it doesn't go all over the place. And I greatly appreciate that.

Occam's Razor -  (Brian M Sammons, Stygian Fox, Softbound 156 pages)  Another Kickstarter, the but one is a singular book (Huzzah!) of Modern-day adventures for Call of Cthulhu, noted for Mature Gamers. And it deals with non-mythos horror and the supernatural. High production values, perfect thing for small adventures, and incredibly creepy.

BranColonia - Setting Book (Samuel Marolla, Acheron Games, 192 Pages) and Macaronicon  (Samuel Marolla, Acheron Games, 160 page hardback). These were a Kickstarter I missed, the first being a settings book for D&D 5e, the second being a collection of all the stretch goals from that same Kickstarter, but picked them up at Olympic Cards and Comics down in Lacey. These are interesting, not only because they delve deep into Italian folklore, history, and humor, but also because they concern themselves with the Epic 6 school of RPG design - that the INTERESTING stuff in roleplaying is in the first six levels, so they concentrate on those, and let the players plateau after that. The result is a permanently low-level campaign of rogues and rapscallions, grimier though not grittier, than many other campaigns. A lot to consider here.

Tak'Dorie Reborn - (Mathew Mercer, Hannah Rose, James J. Haeck, Darrington Press, 280 page hardback)? OK, I will confess - I never watched any of Critical Role, nor its animated spin-offs, and I really should, since the DM, Matt Mercer and some of his players were voice talent on Guild Wars  as well a whole host of other computer games. And I had picked up the WotC Wildmount book earlier. But getting this volume at the Fantasium, my local comic book store, I found the opening sections of Tak'Dorie Reborn, which cover some of the same ground as the Wildmount book, to be incredibly readable and addictively engaging. Really nice production values, and shows off a personal campaign wonderfully. This one does go on the read pile.

Looking at this particular haul, I am stunned by the international nature of it - Italy, France, England, Australia, Denmark, and the US. That's kind of nice. Also nice is the fact that, despite getting a good chunk of these from Kickstarter, there feels like there's a healthy biome of brick and mortars in the area as well. You never know you're in a golden age until it passes, but I'm going to call it - it is good time to be a gamer.

And yet more games will arrive soon. More later.