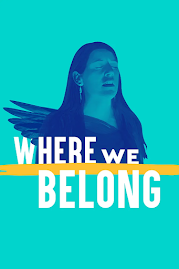 Where We Belong by Madeline Sayet, Directed by Mei Ann Teo,  Seattle Rep, through October 9th.

One-person plays are good for theaters - limited number of people on stage, one central actor. Pacing is set by the actor. Room to explore in real time. A strong performance carries the entire piece.

One-person plays are terrible for theaters - that one person gets sick, there is no performance. In this case, a recent illness forced us to reschedule about three times (that's on us, by the way - we kept moving it to places where we already had commitments - the REP was more than understanding, and in the end we were in the first row balcony seats).

However, it was worth the wait. Where We Belong is an extended personal meditation on survival of indigenous people and their culture in a colonizer's world. Sayet is native Mohegan, the tribe that gets noted elsewhere as "Mohican", as in "The Last of...." She is also an expert in Shakespeare and English Literature, and has sought to justify her place in both worlds.

Her stories are both personal and historic. She tells of growing up and trying to embrace the dominant culture while remaining true to her birthright and birth name. And aptly demonstrates that having a Mohegan medicine woman as your mother puts the traditional Jewish Mothers to shame.  She talks about borders, moving back and forth to England to study, as well as moving back and forth between world.

She also talks of history - Samson Occam and the founding of Dartmouth College, Mahomet Weyenomon, the tribal leader who sought aid from King George II, and Fidelia Fielding, Flying Bird, the last fluid speaker of the Mohegan Language. And Sayet addresses the sterling example of  colonialism - the British Museum, where the spoils of empire are laid out in glass cases and hidden in dusty storerooms.

One piece that I did not know, and that struck me as intriguing, was that the Mohegans were once part of a larger tribe, the Pequots. The Pequots chose to resist the English settlers, and part of the tribe chose to instead separate from them, becoming the Mohegans. And this is the very sort of thing that Graeber & Wengrow talk about in The History of Everything - the freedom to separate, to go one's own way when one cannot remain. I found the connection meaningful and supporting Graeber and Wengrow's idea that the native peoples of the Americas created and contributed to the foundation for the European Enlightenment.

Throughout the performance Sayet was engaging, personable and knowledgeable, sarcastic and wise. She prowled the stage, kept hydrated with multiple bottles of water, and controlled both the stage and the room. The stage itself was relatively sparse - bulbs and light tubes from the ceiling, a curved floor resembling the ocean, divided with a strand of piled earth. And a small island that duplicated (I discovered later) the monument to Mohamet in London. The strand, in effect, was a border between worlds, that Sayet has to cross repeatedly.

All in all, an excellent presentation and well worth the wait. Go see it.