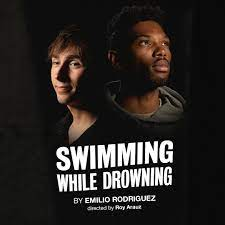 Much to the delight of the people of Seattle, the bridge to West Seattle has opened again, and we can now reach out to that pleasant and distant oasis. With the start of the new season of Arts West, the Lovely Bride and I headed out for dinner at a favorite sushi place and a play. En route, the restaurant called on the LB's cell, and we were told that they had an unexpected plumbing prob and had to cancel service for the evening. We rallied and ended up at a Greek place called Phoenecia where we dined on small plates of lamb, green beans, hummus, and burrata cheese. And then theatre.

The play itself was... OK. A two person one-act, which already doubles the manpower of the Rep's initial outing. The plot is slight - two young teens in a gay homeless shelter quarreling and eventually building a relationship and making themselves better. Angelo (Gabriel FitzPatrick) is perky, newly runaway, sensitive, and a would-be poet. Milia (Broderick Ryans) has been on the streets longer, is toughened up, and for much of the early going just wants to be left alone. The stakes are fairly low, but very personal, and the two come to terms with who they are and where they want to be going.

The actors are fine. FitzPatrick has the greater challenge in that his character is extremely irritating in that persistent, relentlessly perky way. Ryans is more grounded as a character, and his Milia is always reacting to Angelo's continuing attempts at engagement. The two bicker, warm up to each other, sleep, leave, share their past, and eventually make their own choices. Angelo's initial poem, delivered flat and unadorned, grows over time to show the character's own personal growth at the end. The staging is good, isolating the room in the shelter on a small, uneven platform, surrounded by the tables and chairs of a nightclub performance space.

And it was ... OK. It will not really re-align your worldviews. The LB was reminded about real-world people we've known over the years - teens and others who we homeless and troubled, so it touched her. And that's pretty much the baseline for a good experience.