It's going to be a little while before all the dust settles and the votes are counted, so The Political Desk is on hold for the moment. In the meantime, I've been going through my LBBs (Little Brown Books for D&D) and thinking about how we played back in the old days (#BackInMyDay, #TrulyOldSchool, #OGDnD, #GetOffMyLawn). And here's a favorite section from the original Men & Magic booklet (Page 13). 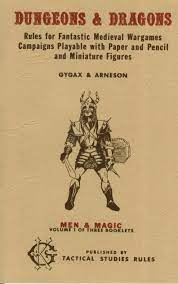 Relatives: The referee may allow players to designate one relative of this character to inherit his possessions if for any reason the participant unexpected disappears, with or without "death" being positively established, for a period of one game month, let us say. At this time the relative would inherit the estate of the character, paying a 10% tax on all goods and monies. The relative must start at the lowest level of the class he opts for, but will have the advantage of the inheritance.

If the character returns, he takes possession of his estate once more (referee's option as to willingness of the relative to give it up) but must pay an additional 10% tax in order to regain his own. Optionally the relative may be allowed to stay on as a non-player character in the service of the player-character. Loyalty of the relative in such circumstance would be at a penalty of from 0 to -6, and he would possibly intrigue to regain control.

Characters with a relative will lose all their possessions should they disappear and not return before whatever period is designated at establishing death.

Note that at this early stage of the game, the DM is referred to as a "referee". Also note that "taxes" are a part of the game from the start. Also, given the amount of precise legalese in the entry, you KNOW that this had to be the result of a particular situation encountered in a game.