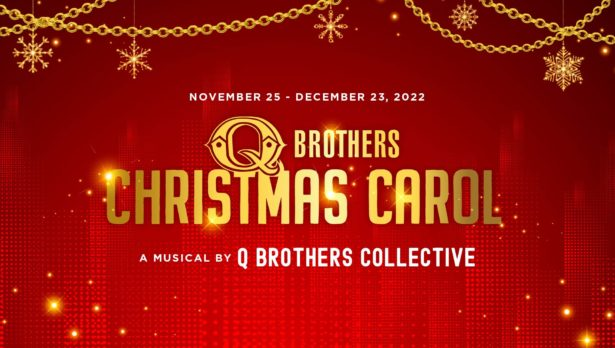 Ah, the Holiday Season in the Theatre, when the standard, go-to, feel-good performance pieces pulls from a writer who died 150 years ago, and whose work has nestled the Victorian Era firmly into our Christmas Spirit. I speak of  Charles Dickena and A Christmas Carol. Both Arts West and the Seattle Rep are doing versions this year, so I (and you) are subjected to dueling Carols.

The story itself has incredibly plasticity over the years. I have encountered the original version, along with musical versions, deconstructed versions, back-stage comedy versions, innumerable TV show episodes, and all manner in between. It has been performed by Albert Phinney, George C Scott, Bill Murray, Patrick Stewart, Scrooge McDuck, Tim Curry Michael Caine (with the Muppets), and Mr. Magoo. The Oregon Shakespeare Festival is running version where the Christmas Spirits are played by the Marx Brothers. And here we have a hip-hop version of this timeless classic.

Hang on, don't click away from here in fear. These are friendly spirits,  filled with good cheer, and this actually is a really good presentation of the story.

You all know the drill on this - everyone knows the drill. Ebeneezer Scrooge is wealthy rat fink who is visited by three spirits on Christmas Eve and from the lessons of the Past, Present, and Future, chooses to become less of a rat fink. It breaks down into pretty manageable chunks. We see Scrooge as a rat, then he gets a heads-up from his dead partner Marley that he is about to be ghosted, then we ratchet through the ghosts and end up with Scrooge so relieved by his change of heart that he makes people worry about his mental health.

And yeah, this is hip-hop, all the way through. We are in the modern era, and this Scrooge is a former math nerd who turned to his capitalistic dark side. Marley is Bob, not Jacob. Christmas Past is Run DMCish with bucket hat and chunky chains, Christmas present echoes cooking-show era Snoop Dog, and the  spirits of Christmas Future invokes  the dance troupe Jabberwock. You don't need to know the history of the art form to enjoy it all as its sprawls out with hep beats and solid rhymes. Yeah, it is hip hop hooked to an ancient carriage, or perhaps a venerable vehicle with fresh horses, but it works.

We caught it on opening night, which had a late curtain and the program only available with a QR code. The house was friends, families, and financial supporters of the theater, and could be literally assumed to be "friendly". Yet the actors earned their many applauses, and bounced through the proceedings with a contagious energy that you can't help to embrace.

Christopher Kehoe Is Scrooge and portrays him in that white-boy-forced-to-be-funky dance moves when he cuts loose. The rest of the talented team (Dre Anderson, Jerik Fernandez, and Lola Rei Fukushima, who I will now think of as a "regular" for Arts West) get the good stuff, shimmering through proceedings as the ghosts, Marley's family, old friends, and encounters, often playing a couple parts simultaneously. The silliness gets contagious, and the performances are solid.

And they play it, for the most part, pretty straight. Scrooge talks to a sack of money he carries around and replaces "Bah Humbug" with "Chris-my-ASS-mis" as a tag line, and there is some Swiftian hints of cannibalism in the Marley household, but for the most part the really nail the beat, both narrative and musically.

I was going to wait for the Seattle Rep version to compare/contrast, but this was good enough to give you a good heads-up at the get-go. It is an enthusiastic entrance into the Holiday Season, and good rendition of the old Dickens chestnut. Go check it out.