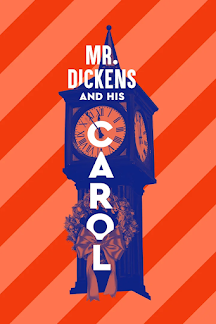 Mr. Dickens and His Carol by Samantha Silva, Developed and Directed by Braden Abraham. Seattle Rep, through December 23rd.

And here is the other Dickensian play on my docket (there is a third in the Seattle area, from the ACT company, which looks fairly traditional, but I am not engaging with it). And I regret to say Mr. Dickens is disappointing.

And that's a pity the play addresses directly a lot of my concerns about theatre in general. It has burgeoning cast in an era where four-person comedies and one-person monologues abound. It has a lot of familiar faces on the stage (If you call yourself a Rep, you should have a Repertory). It actually takes the time to be a full play, clocking in at 2 and half hours. But it all fell flat for me.

This is not Dickens "A Christmas Carol" but is more "A-Christmas-Carol-Adjacent". It tells a story about how "A Christmas Carol" was written. Here is the precis: Dickens hits a literary bump in his career. After early successes, his current serial is fizzling, and in addition he is a soft touch for every needy charity as well as his ever-growing family. Christmas spirit for him is reduced to opening his purse and watching his dwindling savings drain away. His agent proposes he write a quick Christmas book. Dickens hates the idea, drags his feet, and engages with it only because of his financial difficulties. He gets writer's block. He comes to embrace his inner Scrooge, chases friends and family away, and goes doggo, takes up with a local seamstress as his muse, acts horrible to all, then realizes he is being a ass, quickly reforms, writes the damned book and everyone once more rejoices in his talent.

I'm not publicly fact-checking any of this, but let us say it plays fast and loose with the particulars of the situation and leave it at that.

Dickens, as portrayed by Adam Standley, is overmatched by the role. His Dickens is shallow, egotistic, and unlikable, full of himself at the start, his key literary being able to come up with funny names and grind out popular plots. As he slides into Scroogedom he becomes progressively worse and more unpleasant, and he is well into the second act, after two hours of being snarling at the world, before having his epiphany, doing the job, and being filled once more with Christmas spirit. Sequence after sequence of Dickens being put upon and snapping back in return tends to plod after a while.

Plus, the writing is as baroque and ornate as the interior of Westminster Abbey. At the interval I overheard one of the other patrons saying that she felt like English was no longer her first language. Plus, we get a lot of titles, characters, and references to other Dicksenian works, so if you're a fan, you'll get the jokes. And the act of writing is a basically lonely and boring task, so we see a lot of Dickens sitting down to write, and twenty seconds later saying "Ahah! I am finished!" (Would that this be always so - and "A Christmas Carol" WAS written in about six weeks).

The rest of the company is quite good - their characters are broad and they engage fully with them. As I said, familiar faces ease some of the pain, and Cheyenne Casebier as Dickens most recent muse was particularly good. I liked the children as well, both for the young actors portraying them and the fact the play actually gave them things to do, as opposed to using them as mobile set design.

The stagecraft is literally Hamiltonian, down to the rotating stage that allows the huge cast to bustle through it, recreating an extremely crowded London. The ensemble got their steps in as they moved continually through a crowded set, pulling on and off all sorts of props as the scenes changed. The first act is dominated by an spinning erector set of iron piping in the center, which combines neck-craning for the audience with various railings blocking line of sight. Yet there are a few scenes that are inspired in their presentation, that I think were marvelous, but they are badly outnumbered.

I dunno. Maybe it is the sudden snowfall, or the parking situation in the Seattle Center, or being under the weather right now, or the fact the show itself started late and "paused" for a bit with a tech problem, but the Lovely Bride and I were drained of our Christmas spirit by the end of this. The short version? Go check out the Q Brothers Christmas Carol for your cup of holiday cheer.