This Just In: Holiday Gift Wrapup 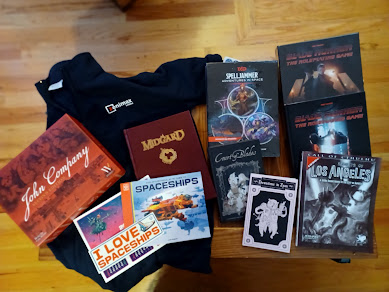 This latest batch of games and other stuff is interesting in that they are mostly not things I paid money for. And by that I don't mean I-got-it-on-Kickstarter-so-I-already-paid-for-it (and kicked in a bit more for shipping) but rather stuff that has tumbled into my lap as gifts. Here's the latest batch.

Zenimax Zippered Sweatshirt (Black with Zenimax logo on front)- This was a surprise holiday present from my new employers at Zenimax Online Studios. Oh, yeah, for those that don't follow my LinkedIn account, I have a new gig as a senior writer/designer at Zenimax. working on Elder Scrolls Online. Cool beans (and a nice pullover as well).

Midgard Worldbook (Wolfgang Baur, Richard Green, Dan Dillon, Chris Harris, Jeff Grubb, and Brian Suskind, Edited by Michele Carter, Kobold Press, 464 page hardbound book). I already have a copy of this book. Heck, I wrote (small) parts of this book. When Wolf was cleaning out a work area, he found an extra copy of the leather-bound, gold-foiled stamped edition, and passed it along. Which gave me the excuse to cruise through it again and wonder at how great is it. Midgard, the "home campaign" for Kobold Publishing, is a world full of worlds. Broken down into various broad areas, it not only reflects different cultures, but different styles of play as well. History, species, gods - regardless of your play style, there's something here for you.

Spelljammer (Christopher Perkins, Wizards of the Coast, three 64-page hardbound books with DM's screen, in Slipcase) Hang on, Jeff, I hear you say, didn't you already talk about this one? Well, yes, but Chris Perkins over at WotC was kind enough to pass along the "standard edition" of the setting, which is the same except for the art on the slipcase. I've had more of a chance to peruse what they have, and to a great degree it has grown on me. Yeah, there needs to be a better ship-to-ship combat systems, but back in the day we really did improve the basic system in original Spelljammer set with the later War Captain's Companion. This feels foundational, with a lot of room for individuals to grow and develop it.

Blade Runner RPG (Tomas Harenstam and Joe LeFavi, Free League, 232 page hardbound book) and Blade Runner Starter Set (Tomas Harenstam and Joe LeFavi, Free League, Boxed set w/rules, adventure, dice, cards, maps) I swear that Free League is either getting a subsidy from the Swedish government, or is secretly owned by a printing company/design house, since the company has some of the BEST looking products in the business (In addition to this one, we're looking at The One Ring, Vaasen, and Tales from the Loop as examples). Nice art, great production values, solid rules. Blade Runner pushes itself as being a dystopian SF world, and I don't think you escape a single paragraph in the book without being reminded that the future sucks, in particular for you.

John Company, Second Edition, A Game of Nepotism and Bureaucracy in the British East India Company for One to Six Players  (Cole Wehrle and Drew Wehrle, Wehrlegig Games, Boxed Game ) I've been spotty on doing board games from Kickstarter, if only because I have a couple boxes down in the basement that I intend to get around to playing some day. John Company is one of those games I supported on a whim, and upon delivery, I realize I may have bitten off more than I can chew. The box is crammed to the point where the lid does not quite fit. And the intro rules strongly recommend I spend a quiet hour, undisturbed, with a pot of coffee (what, no tea?) to puzzle them out. In the game you control a British family working for the East India Company (the John Company of the title), and maneuvering around others in order to set your familial line up for success and avoid total disaster. This is quite simply a labor of love - the game components and impressive and well-rendered, and even the box itself it artistically rendered. However, I am daunted by its sheer impressiveness. Reminds me of those long, engaging SPI/AH games I have on the shelves downstairs.

Kepler's Intergalactic Guide to Spaceships (Jake Parker, JP Creative, 128 page softbound book) I've also been hit and miss with art books - some good, some just average. Kepler's is just really, really good, and I found it a delight leafing through it. It is collection of various ship types, with commentary by Kepler, a four-armed starship mechanic. The ships themselves are pretty cool-looking and the world that is revealed by their descriptions (and the comic story that threads them together) is intriguing. My one regret is that these need more stats and a system for interactions (like ship-to-ship combat). In short, it would be a perfect setting for an RPG. Came with a calendar, two stickers (one bumper, one laptop) as Kickstarter tchotchkes.

Court of Blades (Shawn and Navi Drake, A Couple of Drakes Publishing, 328 page hardbound book). There's a lot of discussion going on about D&D's OGL right now, but one thing it accomplished in the past 20 years is set the limits of the d20 system. And in doing so it allowed for a new generation of radically different RPGs. The Forged in the Dark system is one such solar system of RPGs, which depowers the GM, increases continual player interaction, and creates a more cinematic space of play. I've had the chance to play a few of these, and while I think it would a challenge for my grognard nature to run them, I really appreciate them. The system itself concentrates on one type of adventure, but as a result allows a wide variety of games to evolve from the core system. We have heists, military campaigns, space smuggling, and in this case, courtly intrigue. It describes itself as Gunpowder Diplomacy, the coterie of players represents servants of a particular noble house they are supporting, and would be comfortable from Shakespearean tales to the Three Musketeers. The rules follow the formatting of other Blades products, so if you are familiar with one, you will be able to follow along here, and the artwork is excellent.

Downtime in Zyan ( Ben Laurence, Through Ultan's Door, 36 page pamphlet 'zine). After raving about the art and production values of the previous three items, I have to come clean and admit the art for this latest addition to Through Ultan's Door is below the quality of its predecessors. It is drawings of fantasy mole rats in a style similar to Adventure Time cartoons. But the subject matter and quality redeems all things. The entire subject involves what do do in the down time between adventures, including investment, social relationships, training, carousing, and spell research. We've all taken stabs at doing things between the sword-swinging, and this gives a great structure and some room for thought about entire process. Recommended.

Secrets of Los Angeles (Peter Aperlo, Chaosium, 2007, 192 page softbound book) This was a gift from fellow creative Steve Winter, who discovered he had two copies and offered me one. My affection for the Call of Cthulhu RPG is well-know, and my shelves are starting to groan with the wide variety of products published over the years. But I have a special place in my heart of the layout and graphic design of the black and white sourcebooks they produced. Texturally dense but divided into bite-sized nuggets, with photos of the era and a large amount of sidebars, this is a grand tour of 1920s LA, along with two short scenarios to drive you players mad with. Yeah, I'm a softy for the presentation, the subject and the era (spilling over into the hard-boiled 1930s).

That's enough rambling for now. I think I need to settle down with a little light reading in Midgard at the moment.