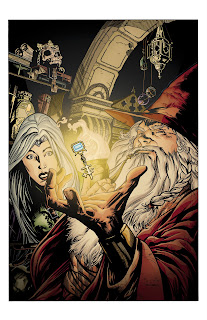 Back in the early days of the Forgotten Realms, I wrote some comics for DC as part of their license with TSR. AD&D#9-12 were first tast of writing for the medium, and I hung around to write the Forgotten Realms line, most of which were illustrated by Rags Morales. Since then I've done little bits and pieces (a Spelljammer fill-in, a Superman tale), but nothing major.

Until now. Diamond has just solicited The World of D&D #3, featuring "Eliminster at the Magefair", a story by Ed Greenwood and adapted for the four-color page by yours truly. That's the cover to the left (I hope - this is an experiment with the blogger images, in the hopes of getting rid of the can't-see boxes - click on it to get a bigger view).

The World of D&D is an anthology book, each book containing adaptations of famous stories from the various D&D fantasy worlds. Whenever possible, they've tried to get the original authors for the adaptations, but Ed was tied up and recommended that I step in (thanks, Ed!). In addition to "Elminster at the Mage Fair", issues #3 and #4 will also have one of James Lowder's stories, "The Rigor of the Game", set in the world of Ravenloft. There will be two cover versions, one for each story - this one is has cover art by Nadir Balan, inks by John Beatty, and colors by Lovern Kindzierski.

It has been a real treat for me to get back to working with the world of graphic storytelling again, and to handle characters like Storm Silverhand and old old favorites like Elminster and Lhaeo. And Ed's been reading over my shoulder (via the Internet) and giving advice.

Yes, you'll hear more plugging about this as we get closer to the release date, but for the moment, I'll just say I've seen the pencils by Juanfraun Moyano, and I am delighted by them!