So you guys know that WotC is about to release a 4th Edition of D&D, right? So as part of the promotion, they are taking one of their iconic characters, the beholder (also known as the Eye Tyrant) on the road. He's popping up in locations around Seattle, frightening the populace and causing traffic accidents.

Here is a shot of the beholder in front of the Seattle Public Library, which is an appropriate building, since the structure looks like it should be mounted on the back of Darth Vader's Star Destroyer. Good nerd cred, there. 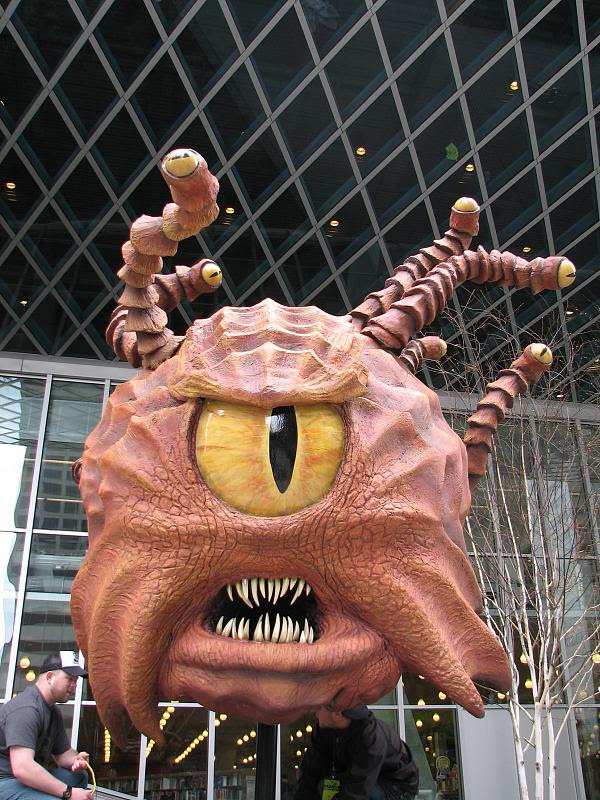 The image has been ganked from joandirk's flicker set. The Slog article refers to the Wiki reference to beholders as xenophobes.

There's an interesting story about that. When we were doing Spelljammer, the artist, Jim Holloway, was did a wide variety of spaceships. I said "I want something that looks like a nautilus", and he created the Illithid Nautiloid, and I had to figure out how it worked. So when I asked for for beholder ships, he gave me a wide variety. And we decided to use ALL of them, and since they were radically different we decided that beholders were xenophobic and hated other beholders. And since various artists over the years made beholders look doughy, crab-like, tentacled, and a variety of other shapes, the idea of different species of beholders (all looking different) made sense.

So that's your D&D history lesson for the day.