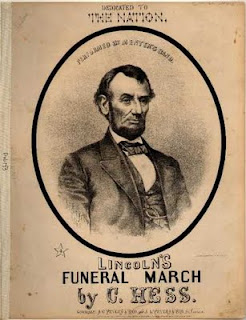 So the next few entries are going to come in no particular order, as I distill Pittsburgh and Cologne out all at once. But I wanted to mention this one up front.

The Heinz History Center is located in downtown Pittsburgh, between the convention center and the Strip District (which, for those outside the Burgh, does not mean what you think it does - it is the strip of rail lines where the produce traditionally came into the city, sort of like Pike Place Market in Seattle, but with the Primanti Brothers instead of tossed fish). It is an extremely nice venue for local history, and has our old-fashioned trolleys, the Steelers' Super-Bowl Trophies, and Mr. Roger's cardigan. A real Pittsburgh institution, named after the late Senator John Heinz.

Anyway, right now they are running an exhibit on Lincoln. The exhibit consists of two parts, a traveling exhibit about the man and the controversy around him (and if you liked Obama-as-Joker, you'll LOVER Lincoln-as-Lucifer), and a locally curated exhibit on the man with his stay in Pittsburgh (including the bed he slept in at the Monongahela House, the best hotel in Pgh at the time), and as well as local material published following his death, including funeral ribbons, commemoratives, and sheet music.

That last one I want you to linger over. In one of the final displays, there is a piece of sheet music, the Lincoln Funeral March. Now in the days before MP3s and even before records, sheet music was the way music could get into the homes of everyday people.

So there is this march, in the display case, and next to it is a small white card, which says the following: "A gift from Mr. and Mrs. John A. Grubb."

Yes, this particular artifact was from my family. My mom's side of the family in particular, and belonged to my mom's mom. The History Center did a great job cleaning it up (the original was very sooty, not from any particular fire but from the general air of Pittsburgh, combined with age), and now it is immortalized (well, presented) in a museum.

I think that's kinda cool. More later,
Posted by Jeff_Grubb at 9:06 AM