Well, apparently I am playing with a full deck now, at least as far as years are concerned.

Long-time readers know that I try to spend my birthday away from the workflow - out of office, not checking emails, phone turned off, usually in some physically different space. I've hiked up Little Si and as far as one can up Rainier without requiring a back country pass, and flipped kayaks. Many, many kayaks.

But with all the recent travel, I really didn't want to go anywhere, and slotting this particular birthday to putter around the house, read on the back deck, and take it easy.

Then I read about some guerrilla art showing up in Gasworks Park, which motivated me on a journey to see go see sculpture: 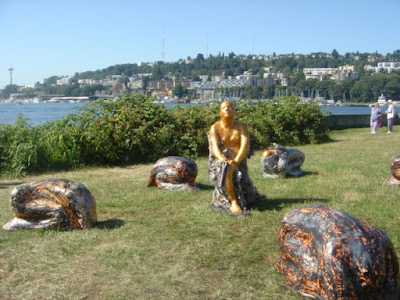 The piece is called "Anew" and was situated at Gasworks by the artist and her friends, who ninjaed it in one night and have chosen to leave it until the rains return or someone hauls it away. Originally, the park decided to haul it away on Thursday, but gave it a reprieve until Labor Day, but already people are starting to haul off pieces.

The art itself is of several cocooned figures slowly emerging as golden humans (A very Sylvari sort of thing, for Guild Wars fans). It is brilliant and beautiful and perfectly located, and the park was filled with people seeking it out.

Once started, we had to continue. The Lovely Bride and I headed to Magnusson Park and "The Fin Project: From Swords to Plowshares" at the base of Kite Hill (site of another piece of G-Art in 2001 when a monolith appeared). The Fin Project consists of a series of dorsal fins from nuclear subs, arranged to look like a pod of whales breaking the surface. Each fin is identified by both its original sub and the name of a whale from Puget Sound. A nice installation that fits smoothly into its environment.

Then we set off looking for the "Sound Garden". Not the band, but the sculpture the band was named after. The Lovely Bride could not find it on an earlier trip, as it had been fenced off. The sculpture is on NOAA property, and in our after-11 world, security had sealed it away.

Security is still there, and after explaining ourselves at the gatehouse, we provided ID and answered some questions and got directions. We found the structure, a series of weather vanes, each tied to a long hollow pipe, sadly quiet, though if this was from the gentleness of the day's breeze or its own age is unknown. Props to NOAA for making the art available again.

And lastly the Olympic Sculpture Garden downtown. Compared to the other structures, this felt tamer and more mannered than the other locations, such that the land itself was restructured to accommodate the art. Everything was huge and monolithic but protected from the passersby by invisible watchers warning not to touch (as the Lovely Bride learned). However, there was nothing wrong with kids pulling all manner of chairs into the shade of the Calder Stabile, and they showed that you can interact with the art without provoking the wrath of the invisible watchers.

One thing worth checking out in the park is the Vivarium, a long building housing a nurse log, with controlled temperatures and rainfall to study the effects of the decay of the log on the plants that spring up around it. The transplanting of the log and its surroundings into the center of Seattle is a telling commentary on our development fever. Joni Mitchell was spotted near the exit muttering something about a "tree museum".

The day rounded up with a wonderful dinner at the Melrose in downtown Renton with John and Janice, and an early bedtime (I am still time-shifted beyond all belief). But it was nice to go on a sculpture tour of Seattle, and I suppose I will do it again, though probably not on my birthday.