H is for the Hyborian Age

I was really going to do Harn, but you know, I've already DONE Harn the last-time through, and it remains a nice, detailed, well-mapped, low-wonder, low-magic world. More power to it.

Instead I will go for the Hyborian Age, home to the well-known barbarian, Conan. It is not Hyboria or Hyborea, for though I see those notes elsewhere in referring to this as a place, the name instead refers to the people who survived the earlier cataclysms that claimed Lemuria and Atlantis, who were followers of the god Bori. Oh, and it is not Hyperborea, which is located in the far north of the Hyborian Age, but which was an old Greek tale (Herodotus)  of the lands of the ultimate north.

The Hyborian Age, though spawned from Howard's work in pulps, comes down to me primarily through the Marvel comics of Roy Thomas and Barry Windsor-Smith/John Buscema/Ernie Chan. I didn't engage with Howard's original material, though it saw wide distribution in the fantasy boom of the late 60s, the way swept clear by Tolkien, as I would not engage with the later material, nor with the later books by Robert Jordan and others in the 80s.

But the comics! The comics were probably the entry level drug of fantasy in comics. Conan himself was part-superhero, with his own iconic look - bare-chested, muscled, square jawed (often square-mouthed), stripped to a bear-skinned waist and occasionally a helmet with tiny horns. His foes were mighty, but he overcame them with cunning and most importantly manpower. Later fantasy characters, such as Elric or Cudgel the Clever, were defined in part of how much they were not like Conan. 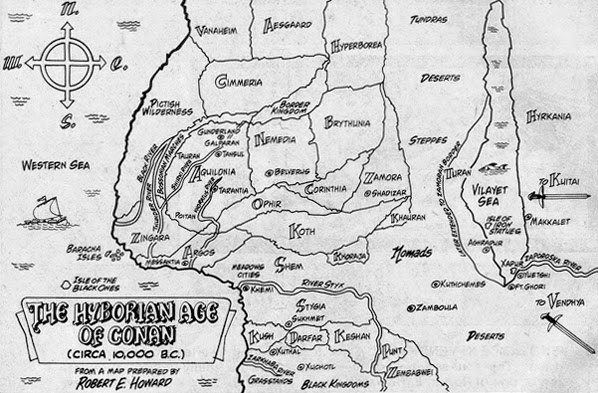 Conan's world defined generic fantasy as well. In the Hyborian Age, civilization was always decadent, either in ruins from a previous age or teetering on the edge of a new collapse. Knowledge was suspect, and magic was only to be trafficked in by dark wizards. Women were young, shapely odalisques dressed in veils or, at best chain-mail bikinis that were impossibly sheer. Monsters were always monstrous. It was a man's age. Yes, Red Sonja showed up in the comic continuity, folded in from another Howard story, but all of the above still applied.

The Hyborian Age also had a map where proto-typical Europeans lived in the spaces and lifestyles of later descendants. Viking types up in Hyberborea, Picts in the NE, Germanic tribes through the center, more decadent ruins and indolent empires in the south. I've seen two different attempts to map the modern world upon the Hyborian Kingdoms. The most traditional map puts Zingara at the location of Spain, and the cultures map out fairly nice. The other connects the lump of Zingara with Senegal in Africa, creating a larger world, but that lacks as much of the societal shorthand Howard seems to use.

In game terms, Conan has been oddly less-successful. A couple AD&D modules, its own game from TSR, a GURPS supplement, a recent Mongoose game, an MMO. It is possible that the reason is that stories (print or comics or even movies) are about the man, not the world. It really doesn't matter if the evil prince Conan overthrows is in Ophir or Nemedia, or if the Monster of A Thousand Eyes is beneath Tarantia or Makkalet. Further, most RPGs and MMOs are about acquisition of stuff - armor for protection, weapons for damage, raw gold for keeping score. Conan, the best of his breed, the master of his universe, was often broke without armor, and needed few things in his life. To do a Conan game would be to change the traditional goals to something else, and in a D&D-dominated universe, is rather difficult (note of self-defense - the most recent Mongoose RPG may have dealt with this - I do not have it at hand).

So it is the man, not the map, which makes The Hyborian Age resonate, and causes it to be remembered. But, we still have the maps, anyway.