Annihilation by Jeff Vandermeer  Farrar, Straus and Giroux (a division of McMillan) c 2014 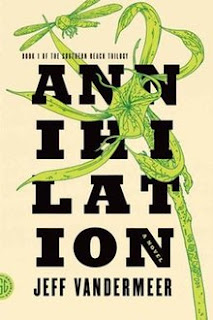 Provenance (where I got that book): Elliot Bay Book Company, sometime last year. I really miss the old location near Pioneer Square, so I don't make the new place up on Cap Hill a destination trip, but if I am up there, I drop in, find something interesting, and then buy horribly expensive and bad-for-you ice cream at the nearby Molly Moon's. In this case, the something interesting was this book, in the SF section but presented in a more literary format. I mean, look at the cover. Dominated by the title, tan, heavier stock, embossing, big block letters, the strange alien GREEN plant thing is only really noticeable after you realize you've been looking at the big block letters for fifteen seconds already.

Despite its look (and its text-heavy, bright green back cover), the novel came home and sat on my shelf of abandoned books (more on that somtime later) for a while, until the Lovely B and I went to the movies, where a trailer for the film of the same name (and same concept, but different resolution, I understand). And I said, Yeah, I have that at home. So I took it down and read it.

Review: Annihilation is a very good book about the eradication of self and identity. It has that mounting horror of slowly being swallowed by python, and being conscious of it the entire time. Deep and descriptive, yet enigmatic and questioning, It is one of those book that you realize quite early on will not end well, but you are still drawn through it. From the first line you know that something is off, and as things progress, they will get worse.

Here's the precis: Our protagonist is a member of an all-female team assigned to investigate an anomaly. This anomaly is Area X, a shimmering curtain along a tidal zone, in which the life has ... mutated? transformed? been replaced by? integrated with? ...  alien life. Previous teams into the zone have not come back, save for the protagonist's husband's, and they were deeply altered.

And the send of self-destruction comes from before they even move into the Area X. The team members are not known by name, only by position  - psychologist, surveyor, anthropologist  (our protagonist is the biologist). None get capital letters to their titles. They have old weapons and strange devices on their belts. Only the surveyor gets an assault rifle. Their training was odd and off-base for the mission. Information has been withheld. Hypnotism was involved. Even before they saw the strange plants and creatures of Area X, the erosion of who they were had begun.

And it accelerates quickly. An underground complex that the protagonist cannot help but describe as a tower shows the their reality is quickly shedding its skin around them, leaving behind structures that may be flesh or only the memory of flesh. The sense of creeping dread, slowly swallowing them but not to the point of creating despair, is evident in the pages and masterfully pulled off. It is the calm analysis of the dying which underlies the otherworldly nature of Area X with its vibrant, unexplained alien life. Is what is there being eliminated, or transformed? Does that apply to the protagonist as well?

Annihilation is extremely well-written, evocative, and downright creepy. Not, there are not happy endings, or even much in the way of explanations. No one pops out and says "Well, you see, it is all because of this." And that's OK, but much of the trip of internal, as are the changes. There are two more books in the series, but I don't feel overwhelmed to get to them immediately. The book ends with enough for me to think about, and that's OK.