Theatre: Putting on the Ritz 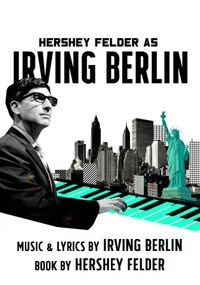 One of the advantages of season tickets (I may have mentioned before) is that it will get you to things that you might otherwise pass on. I mean, you've already paid for the seat, and even if the concept seems like something you would not normally be interested in (One guy with a piano talking and singing Irving Berlin songs?), you might as well show up.

And in this case, you'd be glad you did.

This was an incredible performance, a real highlight of the season. Mr. Felder combines engaging storytelling with his brilliant work on the keys (I was fortunate to get a good view of his hands dancing at the the piano). He has the ability to play complex music and lock the audience into his words at the same time (a talent which he describes as "schizophrenic" is the after-show Q&A - if he offers that session, stay for it). And he embodies the character and brings it to life.

The set-up is basic - Irving Berlin, over a hundred years old and bitter about being passed by on the public stage, looks back at Christmas time on his life. Linear history. Family fleeing Russia for New York City. Job as singing waiter, translating into composer. No formal training, can't read music, just narrates his songs to assistants. Big success. Heartbreak in the loss of his first wife and his son. Becomes the songwriter of the middle of the American Century. Fading with the advent of Rock and Roll and Elvis (though I would pedantically add that the transistor freeing radio from the front parlor had a bit to do with the popularity of both).

But this is a memoir, not an autobiography, so I will park my fact-checker at the door. Berlin was incredibly prolific, so there are a lot of songs you recognize. The themes that swirl around Berlin are both a key eye towards the popular pulse of public, and that all his songs are written with someone in mind. They may go out there, and be attached to a particular singer or movie or play, but the are very personal to their creator. But the emotion that creates them is not always shared with the listener, as they are changed and re-purposed as they move through the population.

Should this be considered a play, or a performance? Doesn't matter. The music is brilliant. The stories are brilliant. Hershey Felder is brilliant. This is one worth seeing, even if you don't have season tickets.