Big Pile of Books: When in Rome

I have a large pile of books at the end of my desk, accumulated over the course of the year and now demanding reviews. But I'm surprised that I have only one historical non-fiction text among them. That can't be right. 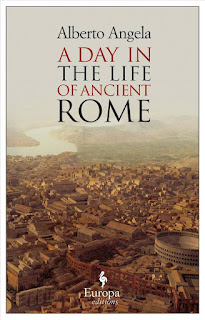 Well, it is, in that much of my nonfiction has been taken up with a single volume: The Mediterranean and the Mediterranean World in the Age of Phillip II, which I will not be talking about here because, well, I am not finished with it. But has been the long-haul book for lengthy trips away from the home base. Instead, let me talk about this one:

A Day in the Life of Ancient Rome by Alberto Angela, translated from the Italian by Gregory Conti, Europa Editions, 2009

Provenance: I thought I had gotten this text from a friend, but a sticker on the back identifies it clearly as a denizen of Half-Price books, where overstocks go to die. The local Half-Price has carried a lot of good general histories, and this is one. Its appearance feels to me like it more European that Amercian - softbound trade with folding end-flaps, and is pretty substantial.

Review: I started reading this in preparation of running a Cthulhu Invictus game, which is Call of Cthulhu set in the Roman Empire. In addition, I've been reading SPQR by Mary Beard, which gives me larger view of the entire setting (and is really good, but, again, will not review until I finish it, which may be some time).

As a side benefit, after finishing the book, the Lovely Bride and I were invited to Lucca Comics and Games as guests, and spent the week before in Naples/Napoli. So we got to tour Pompeii, Paestum, and Herculaneum with a extremely knowledgeable guide (highly recommended - she's really good) and this book was valuable as preparatory work.

Day in the Life gives me a lot of thought about how to fit in the small bits of life and times for the characters who I may be throwing around in the midst of Romanic Cthulhu adventures.

Here's an obvious one - night is dark but not empty. I know it is a shock, but in our modern times, unless we are way the hell away from everything, we still have some ambient light. Rome didn't/couldn't do that. So they were to a great degree hostages to daylight, and evolved their situations accordingly. Yet the darkness is also a time for deliveries of food and supplies to the city, when the streets are (relatively) empty of the rest of the citizenry.

Another important one - the vast majority of the population were camping. Yep, we know about the layouts of the Roman villas, (And can identify vomitoriums, impluviums, and shrines to house gods on sight), but most of the working class had small tight quarters in tall buildings, which got worse as you went up (the opposite of penthouses in the elevator-assisted modern age). Not a lot of amenities, not a lot of privacy. A lot of rent-paying squatters.

This is obvious stuff when you think about it. Rome had a strong civic and public life in part because of a lack of personal, private space. The did have food kiosks (open-sided restaurants to get a quick meal), and did have running water (the baths, which were social centers for business and schmoozing). Other parts do feel alien, and I need to think about them more when incorporating them into any type of campaign.

The conceit of the book is traveling through a single day, pressing through the city to the a gladiatorial contest and then to a banquet (the laying on couches thing). Angela puts together a nice, solid narrative which carried through the translation. If you want to get a nice general text on Roman life (or what we think Roman life was like), here you go.