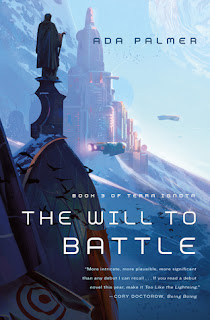 I continue to have a lot of books on my desk. They are mostly fiction, and I am reviewing them in part to get my thoughts down and freeing myself to eventually passing on to others. This one will wait, only because it is part of a series that has yet to conclude:

The Will to Battle by Ada Palamer, TOR books, 2017

Provenance: Purchased at the Elliot Bay book company, which is no longer on Elliot Bay but has moved up to the Cap Hill area. I did not intend to purchase it or review it, this being book three of a four-book set, but I enjoyed the first two very much and took it home and devoured it as well. Spoilers, I should warn, abound.

Review: This is Terra Ignota Book III. Books I and II, which I talk about here, are pretty much one volume were this a trilogy. Book III in this case is the saddle booth. We laid out the world and chased the protagonists up a tree in Books I and II. Book IV we will/may see the resolution. Book III is keeping all the balls in the air and laying the groundwork for the finish (I hope).

The story so far: We are 450 years in the future and the future is falling apart. The utopia that has persisted for a long peace has been revealed to be the result of traffic control assassins who use massive data at their fingertips to identify targets and remove them through "accidents". The population of the earth, broken up into Hives of common interests and philosophies as opposed to nations, are jockeying for position. The young mutant (?) with the ability to modify reality is dead, his chosen toy soldier and heir transformed into Achilles, a warrior in a world that has not seen traditional war for ages. Oh, and God is here. Not our God, but a God supposedly from somewhere else, invited here and incarnated with connections to all the ruling hives. Said visiting God will break apart the world and remake it into something that would not rely on secret assassins to survive. Everyone just needs to surrender and let him do it. And the question of if that is a good thing or not drives the world to brink of war.

And in this we have Mycroft Canner, who I have previously called the Necessary Man, who has contacts with all the factions and the ability to be where he needs to be to record the major decisions. Except Mycroft himself, like the world, is coming apart. The unreliable narrator is even more unreliable, as we see him have conversations with dead comrades, dead philosophers, and oftimes the reader themselves. How trustworthy his observations are remain up in the air.

The book is dense is its style and every character packs a half-dozen other titles and names (thank the gods for Dramatis Persona listing at the front to give one some clues) and it works. Saddle books often are marking time before resolving the issues, but this one has the task of getting a supposedly rational, clear-eyed population geared up for war, with tools they have left rusting for generations. The players don't seem to have the optimisms that has accompanies so many of our "modern" conflicts - the confidence that this will be over by Christmas that evaporates under the thunder of the first artillery strike. But they do seem naive about what this means in a society that become borderless in many ways, where the factions are easily identified by self-chosen uniforms. It will be a war like no other.

And I'm looking forward to it. Having chased this future utopia up a tree, and thrown rocks at it, I am curious if Palmer (and her characters) can then get it down. Will humanity, and its leaders, and its gods and godly visitors, have to shed their cool, thoughtful approaches for the savagery of conflict, a savagery once embraced by Mycroft Canner as being the component of humanity that evaporated over the long enforced peace.

The last bit of the story won't be out until 2021, so it rests here for the moment. I look forward to coming back to the complex, often convoluted world, and see what happens.