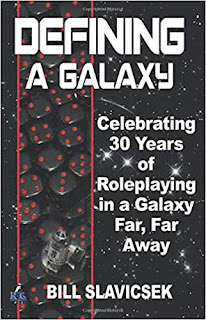 Defining a Galaxy: Celebrating 30 Years of Roleplaying in a Galaxy Far, Far, Away, by Bill Slavicsek, published by Owen K.C.Stephens/Rogue Genius Games, 2018

Provenance: Gift of the author. Bill Slavicsek was a co-worker at TSR, my boss at Wizards of the Coast, and he and his Lovely Bride, Michelle, come visit every Thanksgiving.

Review: A lot of the attention of  recent "gaming history" has been, naturally, about Dungeons & Dragons, and there are a number of good books out on that subject. This one is on an equally intriguing subject, in that it covers one of the great early licenses in our hobby - the Star Wars RPG from West End Games.

By 1987, the original trilogy of movies was done. There was talk of more, but no definite plans. There had been a few original novels (a trilogy on Han Solo, A trilogy on Lando, Splinter of the Mind's Eye (since retconned out)), some animated cartoons, and a Christmas Special that had been shown once, then buried. The Marvel comics had a good run but were winding down. West End Games had a lot of stuff from the movies, but very little hard facts about the universe behind it. What was the Kessel Run? Who were all those aliens in the bar? How did the Force work?

This is where West End, and Bill in particular came in, creating the connective tissue and background for the universe. Using what was there to build the support scaffolding for it. In a movie, you can just show a bunch of driods - no one from the audience has the chance to question who they are. Not so in an RPG. The various aliens had names "Hammerhead" and "Squid Head", names used in the toys. Bill christened them Ithorians and Quarrens, and gave them home worlds and characters. In doing so, Bill developed the depth of the universe, not giving you new stuff, but developing the material that was there. Lateral development was a requirement for transitioning between film and the tabletop.

And it stuck. These creations became foundational for the expanding Expanded Universe (now called Legendary. Novels were based on the information presented. The backstories have been accepted as canon. And while changes occurred as new movies and television shows were created this material became core reference for the universe in a variety of media.

And it is kind of cool for Bill to see something that he had created 30 years ago get a name-check in a new project. It is also cool for us to see the process behind the scenes that helped create this expanded universe. Bill's style is open and conversational, a befits a memoir. He's telling stories about his time at West End, and the creative magic that they made there.

Interested? The book can be picked up on Amazon, or here.