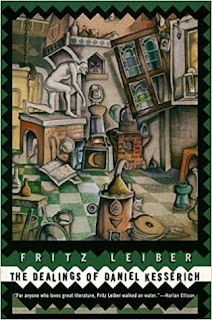 The Dealings of Daniel Kesserich by Fritz Leiber, TOR Books, 1997

So with the ongoing situation, I've been reading a lot. I have a sizable library in the basement, which includes a lot of books I have not read/ have been meaning to read, and this is the perfect opportunity. So these are my Plague Books, and what I have to say about them.

Provenance: This particular hardback volume was purchased at the Barnes & Noble in Rockford Illinois Saturday, April 19, 1997. It was read immediately and finished on April 20th (It is a short book). Then it had a second reading in 2015, and a third in 2017. I know all this because I got the book from John D. Rateliff, who has not only kept a log of every book he has ever read, but also notes in these books the dates he purchased and read them, and pertinent facts about where he purchased them and if his wife was there at the time. So the book has now been read a fourth time, in 2020 (and will be so noted for the next reader).

Review.This book has an history as roundabout as for this individual volume. Fritz Leiber was a master fantasist, and was creator of, among other things, the Fafhrd and Grey Mouser stories. This is an early work, written in the 1930's, when the young man was in communication with H P Lovecraft, then in his twilight years. I don't have any reference for what Lovecraft thought of the story, or even if he saw it, but the manuscript itself was lost in the 50's, and resurfaced only in the 90's following Leiber's death. It is a slender tale, less of a novella than a short story, and for this edition was illustrated nicely by Jason Van Hollander.

If the title were not overwhelming the text it supports already, the full title is The Dealings of Daniel Kesserich: a Study of the Mass-Insanity at Smithville. And it poses itself as a description of some strange events in the small Californian town of Smithville, with an addenda.

Here's the gist of it: Our narrator, George Kramer, comes to Smithville to visit three old friends from college. John Ellis and Mary are married, and Mary was a native of this town, so they moved here. Kesserich settled there soon thereafter. When Kramer arrives, Mary is dead, and Ellis and Kesserich, thought by the rest of the town to be the resident mad scientist, are missing. While he is there, the town itself starts to wake up to the fact that Mary's death was not what it seemed, and Kesserich (and/or Ellis) may be responsible. Memories start to shift, mobs gather demanding justice, and result in a dramatic confrontation. A year later, our narrator meets with one of the principles and figures out what really happened.

And the story is a good example of a journeyman effort, with some good ideas nestled into some less good prose and odd pacing. The characters react strangely to their surroundings - the narrator sees a small rock he had not noticed before and wonders if he going mad (MAD!), then witnesses his mad scientist's friend's house blow up and takes it in stride. And after the house blows up, even though the narrator is the only one present, the police don't immediately come to conclusion he was responsible (a mention of it is made later, quickly dispensed with, even though the townspeople are turning into a mob). And the first dozen chapters are pretty much  a wind-up for the final pitch where All Is Revealed.

And to be honest, the All that is Revealed is pretty good. It is a different take on time travel and how it feels to be within a timeline where the past changes beneath your feet. It could be the basis for an interesting Call of Cthulhu RPG adventure. It could be an excellent story with a revision or three. With its pastoral Californian setting, it feels more like Bradbury than Lovecraft. But the shows the foundational talent of Leiber that glows in later tales. I can see why he didn't come back to it, and why it lay fallow for so many years before it disappeared entirely. Still, if you are a completest for his work, it is a worthy entry.