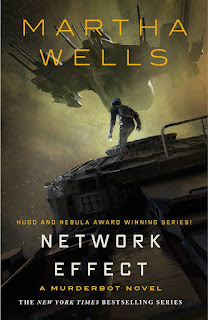 Provenance: A while back, I was cleaning up the big stack of books at the end of my desk and reviewed four of the Murderbot Diaries by Martha Wells- nicely-sized novellas involving a particularly sarcastic  organic/mechanical construct called a Security Bot, or Secbot, but who refers to himself as Murderbot because he could murder all his human clients if he wanted. He can do this because the internal governor in him brain keeping him from killing his human clients has been uncoupled. But he doesn't want to kill at the humans so much as keep them from getting themselves killed because either situation would interfere with him watching soap operas that he's pirated onto his feed.

Anyway, in the wake of that review, I was contacted by someone at Tor, who asked if I was interested in getting an uncorrected proof (read, advance copy) of the book before its drop date in May. I said of course, and I got a box of about ten books, including Network Effect.

Anyway (again), the box arrived when I was in New York City for a recording session (before all the current craziness), and my lovely bride swooped in, opened the box, and had claimed the book before I got back (Fine. I was reading William Gibson's Agency, anyway, at the time). Once I had pried it from her fingers I had a chance to devour it.

Oh. And I promised myself I would read at least one of the others in the package, just in case the person who sent me the box is reading this and want to send more. Like when Ada Palmer's Terra Ignota series wraps up. Just mentioning it in passing.

Review: This book is a bit of a change-up, not in the least because the series graduates from its spritely novella category to a full-fledged, full-sized (and modestly hefty) novel. And this is an interesting change, in that the first four justified their size by moving quickly and firmly through from beginning to end. In these earlier volumes, our Murderbot is on stage for a perfect amount of time, lest his kvetching becomes whining (usually on the subjects of why humans are stupid, why humans should not be trusted with weapons, and why is he letting these humans be stupid and use weapons in the first place). Now the Murderbot must command a larger space, and the story and the stakes swell accordingly.

And Wells pulls it off, as our Murderbot has evolved into much more than just a variant on Marvin the Paranoid Android. We are used to his interior monologues but also have seen him grow from being the rather self-centered grumbler into being a deeper, more expressive figure (though still mostly self-centered and still a grumbler).

Our grumbler has an adoptive family at this point, who have an enlightened (though not perfect) perception of AI life and what the SecBot wants in the universe. For his part, the SecBot thinks of himself as a Race-Bannon sort of bodyguard (because corporate mercs are still trying to kill some of his people), but it is pretty obvious that he has a soft spot for them, though he teaches a masterclass at denying his feelings. He and few of his clients/family are kidnapped by ART (A-hole Research Transport), a sentient starship who the SecBot has dealt with before. The action travels to a colony world which may be influenced/corrupted by an ancient alien presence.

Wells' universe does not have aliens, except in the extinct variety, who have very alien tech that can destroy entire colonies if they are even touched and is the one thing the ruling corporations fear. So we (humans) have effectively created our own aliens - AIs, bots, enhanced humans, who think very differently than the rest of us.

SecBot is a Asimovian robot, if you replace the word "human" with the word "client" in the Three Laws. SecBot in the course of his duties will dispassionately maim and dispatch threats his clients, including human ones, but will never let his humans come to harm, especially from their own stupidity. Even with the governor circuit that controls him disabled, he still has an internal moral code that justifies helping others. However, the difference is the SecBot gets to decide who those others consist of. His own internal justifications and excuses aside, that's what makes him interesting.

In addition to no living aliens, this particular future galaxy lacks any strong centralizing force. There is no Federation or Empire here, just a collection of competing predatory corporations jostling each other for dominance and ruling over people with a brutal calculus that shames even the robot in its cold logic. All corporate stupidity is written large here, and seems to present the greatest dangers to humanity, and to the SecBot's humans.

All in all, SecBot graduates to a larger space and more involved stories. Wells keeps a number of balls and factions and characters in the air, and advances not only SecBot's development, but the greater universe around him. He has quickly become a favorite alien of mine, in that he doesn't WANT to become human, and only grudgingly wants to understand humans so far as it would allow him to do his job easier. And this feels like the first of a new, larger series starring the Murderbot. I recommend you hunt this down in May (or whenever it arrives at your recently-reopened bookstore) and give it a read. It is well worth it.