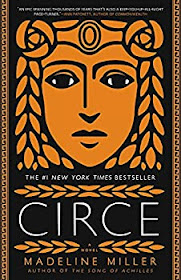 Provenance: Selected by my Science Fiction Book Club at work, to be finished by the end of July. Ordered from Amazon. Did not finish until the first week of August. Took this long to put a review together.

The argument of whether this is a "science fiction book" can be made, but really that does not matter. No, it is not SF in that there are no aliens, robots, or other futuristic trappings. And I could argue against fantasy as well, as it is well-grounded in mythology. But ultimately, genre terms like SF and Fantasy are marketing terms - "If you liked X, you will like Y". Like all those fantasy books in the 80s that were "In the tradition of Lord of the Rings", no matter how tenuous the connection was. Ultimately, genres are a mall map, telling you where in the bookstore you can find books that are science-fictionish (remember bookstores? I remember bookstores). Amazon, by the way, slots SF and Fantasy in a more generic "genre fiction" categories and trusts to its algorithms to send the consumer to related works.

But the nature of genre marketing reaches down into the physical presentation of the book itself. From initial contact with the dead-tree copy you can tell this is "Literary Fiction", or "Bestseller Fiction", or even "New York Times Bestseller Fiction". The book cover is dramatic and high-concept, it is embossed and foiled (this stuff ain't cheap, in book terms). Two-color endpapers, a map on the inside cover. Listing of praise and awards on glossy insert on page 1, five MORE pages of praise follow that one, concluding with one from Gwyneth Paltrow, actor and owner of Goop. Reading Group Guide in the back and recommendations for further reading. Everything about it says "This is literary! This is important!"

But what about the words themselves, Jeff?

Review: Here is the short version: All gods are A-holes. Humans are only marginally better.

Circe is a goddess. A very minor one, but a general-terms a goddess nonetheless. And despite her goddess status she gets kicked around a lot. Her family are notable names in the mythos. She is the Daughter of Helios (pre-Olympian Titan of the Sun), sister to Aeetes (original owner of the Golden Fleece), and Pasiphae (Mom of the minotaur). There is not a thimbleful of empathy or self-reflection anywhere in the family, and that's what sets Circe apart from them. Circe has a sliver of concern for others, and worries about her own lot in life. She discovers real magic, she creates the monstrous Scylla out of petty jealousy, she is exiled to an island lest she upset the Olympian gods (shown here as another godly crime family), hooks up with Daedalus and later Odysseus, raises Odysseus' child, and ultimately comes to terms with what she wants in the world.

A lot of what I just said is already in the mythology. I knew Circe primarily from the Odyssey, and yeah, I get her confused with Calypso, with whom she shares some traits (has an island, has powers, slept with Odysseus). There is a lot of Circe threaded through Greek Mythology, and more got added over time. Miller weaves together all these connections to create a solid tale with Circe at the center.

In writing this up, I went to the Emily Wilson translation of Homer's version for the traditional story of Odysseus. In that version, Odysseus' men are welcomed, fed, and transformed by Circe, with no idea why she acts that way. One sailor escapes to warn Odysseus, who is then given a cheat code (antidote) by Hermes, and when he does not fall to her spells, Circe throws herself at the hero's knees and begs his forgiveness. Mind you, the story doesn't make a lot of sense, but then it is Odysseus' retelling of the encounter. Miller's makes much more sense, grounding Circe's actions, and her heroine is taking the measure of clever man who will not walk blindly into a trap. Miller is much more sympathetic to Odysseus as well, and more grounded, portraying him both as hero and villain.

And through the bulk of the book, no act of kindness, sympathy, or honesty goes unpunished. Miller's Circe lives in an unjust world, and has to deal with that continual injustice. She gets her moments - her relationship will the brilliant human Daedalus, raising Odysseus' child, life with Penelope after Odysseus' death, and there is even a reference at the end of a wandering carpenter and his wise-woman wife which bespeaks of the new god that will replace the old (but perhaps I read too much into it). Having confronted a horrible world, Circe ultimately dreams of making a better one.

Miller's Circe its into the category of a lot of modern retelling - take a traditional villain and turn her (it is often a her) into a fully-rounded protagonist. Wicked. Hook. The latest Beowulf translation with more space allotted for Grendel's Mom. Challenges to a (usually male-dominated) traditional canon, adding nuance to the tale. Miller weaves like Circe at Daedalus' loom, pulling the scraps and threadbare references together, adding new work entirely, to end up creating a better portrait of what has been a traditionally wafer-thin antagonist.