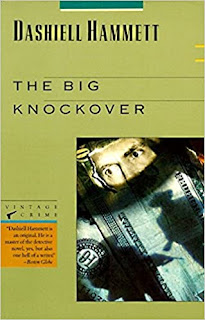 The Big Knockover by Dashiell Hammett, Selected Stories and Short Novels, edited and with an introduction by Lillian Hellman, Vintage Books, 1989, originally published by Random House, 1966

Provenance: The volume, shown right, is from the collection of John Rateliff, known to the 'net as Sacnoth. John has been cleaning out his library, and a lot of his mystery novels have found a space at Grubb Street. So while his shelves start to sort themselves out, mine groan with Hammett, Stout, Allingham, Sayers, and Peters. The copy I have is more grey than green, but that may just be from age.

Review: Our protagonist for all but one of these stories is only known as the Continental Op - an agent of the Continental Detective Agency. We don't know a lot about him. He's middle-aged, shorter than most and little wider, but we only know him by his actions - he will lie for a good cause, he will make deals with criminals if he must, he'll feel bad shooting a woman but will do so if he needs to. No one calls him by name that he records. He narrates in first person. He is a bit of a cipher, one of the first of the hard-boiled, noir detectives.

The bulk of the stories in the volume are from the 20's, when Hammett dominated Black Mask magazine, and given my preference for that era, I enjoyed the tales a great deal. Due to the movies like The Maltese Falcon and The Thin Man (also Hammett), I tend to mentally put Hammett's work in the Depression and the War Years as opposed to the Roaring Twenties, but it fits just as well here.

One of the things that strikes me, going through stories, is the neatness of his language and the broadness of his scope. Hammett does not use five words where three will do. And when I don't quite get what the Op is up to, I just have to wait a few paragraphs before all becomes clear. By broadness of scope, we see a medley of situations and places - not just San Francisco in the second quarter of the century. The Op goes to a pocket kingdom in Europe. The Op goes to Arizona and hangs with cowpokes. The Op goes to Chinatown and Beacon Hill as well, but he carries his noir with him, and fits in equally well.

One story is from a later period, his unfinished book, "Tulip," exhumed and presented here. And it is a unfinished first draft and tough read. A former Army buddy looks up a friend and they tell stories. A lot of the stories sound like things Hammett experienced. Here the sparceness of his prose works against it, and the lack of the formula for a detective story leaves it without a central spine. Good words, though.

This volume takes its name from the final story, which is two stories, one story carrying that name, then a second tale added almost as a coda. A mastermind puts together an ultimate heist - calls in criminal talent from all over the country, and they hit two banks in the same morning, sealing off the streets and making a clear getaway. Then all the participants get bumped off by the lieutenants in the robbery, who are then bumped off by their higher ups. A very corporate chain of command. And all the wise guys and grifters have names like Bluepoint Vance and Red O'Leary and Happy Jack Hacker. Just the plot itself makes for a great Gangbusters adventure, or with a little more eldritch horror, a Call of Cthulhu evening. With Hammett's hands on the typewriter keys, it shines. I am surprised that this hasn't become a film over the years. Amazon Prime, take heed.

Turns out I have a later edition of the book on my shelf, tucked between The Dain Curse and Red Harvest. The Big Knockover makes me want to revisit them and reminds me that this is the stuff that set American detective fiction up as a country in its own right, and made San Francisco its capital.