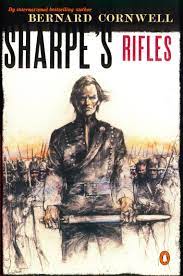 Provenance: Purchased at the Page Turner in downtown Kent. During my sojourn of selling off my comics collection, I swore that I would make no purchases until I had sent all the comics off. However, with the last group I took some store credit, and splurged on a number of volumes, including some Ellison, Derleth, Forester, Fraser, and some of the Sharpe's series.

Review: I really liked Patrick O'Brian's Aubrey and Maturin sea novels, which dealt with the age of fighting sail during the Napoleonic Wars. So I was looking for something of the similar era and had heard about the BBC production of this series. No, I didn't watch the series, but I picked up a volume or three. This is purportedly the first, from the number on the spine, but really is the ninth published and the sixth chronologically in the series (The protagonist had before we meet him here had been in India and at Trafalgar).

Not that good. A solider-of-the-line rifleman who was promoted to Captain for heroism (from previous/later books) and squirreled away as Quartermaster for his unit on the Iberian Peninsula to resist the invading forces of Napoleon Bonaparte. Other officers don't like him because he is not a "real" officer - from the Upper Classes. Those he commands don't like him for the same reason - they believe officers are born, not made. So he's pretty miserable. Then the superior officers are wiped out, and it is up to Sharpe to lead his recalcitrant men to something resembling safety. In the middle of this, he gets involved with a Spanish Nobleman who is carrying a mysterious treasure, who is being pursued by his own posse of enemies.

Sharpe is not great at his job. He knows more than most of his superiors about tactical combat, but is out-thought and out-maneuvered by his enemies and his supposed allies alike. His main asset is a bulldog determination and battlefield cunning that makes him grit his teeth and get the bloody job done.

What Cornwell does well is both setting up his battle plans and showing how they quickly disintegrate upon contact with the enemy. His battles are described in sand-table accuracy, and the results of combat in grande guigol goriness. He captured the smoke from the pans of the rifles and the screams of the horses.

By the same token, his writing tends to tell as opposed to show (you want to know what they mean by this, take a look here), particularly with internal characterization. We are taken into Sharpe's head with long reflections and recriminations. And sometimes we are bounced out into another characters' head to share something that is not fully revealed from other characters, which is a bit frustrating as well. In combat, Cornwell pulls it all together.

There is also an element of fantasy here that would almost fit in Greyhawk or the Realms.  Sharpe's supposed Spanish ally, Blas Vivar, is on a quest to take a holy relic to a city held by the French, to raise it in a church with a ceremony to rally the people of Spain against Napoleon. This entire plot pitches the gritty reality of the Peninsular campaign towards high fantasy, and while Sharpe doubts, he goes along with it. As a result, he gets played by Blas Vivar multiple times.

What can you say about Sharpe at this point? Well, he's got room to grow, though the multitude of books before and after this indicates that it may be a low learning curve. The writing is solid, and I have a couple more volumes on the shelf. But I think I will try a few other things first.