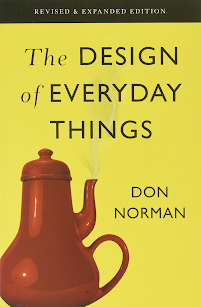 Provenance: I was part of a online seminar a while back, and one of the other participants, Brannon Boren, recommended this book strongly. Picked it up via Amazon, and soon discovered that it was a bit of a Bible among those engaging in games design, in particular UX (User eXperience) and UI (User Interface).

Review: Even before this book, I was sensitized to UX/UI, due to my job. In part, an Amazon goal is to make processes (ordering stuff, playing games, watching a video) as frictionless as possible, and I am as a result aware of every bump, hiccup, and obstacle on the net and in real life that gets in my way. Just as an example, I am calling out those self-checkout kiosks at the grocery store, which are so bunged up they require live employees to stand by to help out us troglodytes who flail away at them.

But trogs we are not, says Norman - it is primarily the fault of bad design, that does not take into account how people actually use the things they use,communicate with them easily, and can handle when the user does not do the expected thing. And this book is filled with examples of bad design, good design, and evolving design, and the challenges that one faces when trying to create utility for objects that will be used by people who are not in the same room as you, and whom you cannot yell at ("No, turn the knob to the right. Clockwise! No, the OTHER clockwise!").

And this is familiar territory. You've hit things that don't work the way they should - doors that look like they push when they pull. Knobs that don't map directly to the burners on the stoves. Light switches that are not even in the same room as the lights they control (I have a LOT of these in our house, much to the frustration to guests who walk into a darkened bathroom and don't realize the light switch is Back Out in the Hall). The book has a lot of examples, and Norman returns to them several times to push various points through the text.

The book itself is written in bite-sized, readable bits, and is better for reading over a section, considering it for a while, then moving on to the next. IDeal  if, say, you're commuting on a public transport. Or between meetings. Or, well, in the bathroom. This is (I have to admit) where the bulk of my consumption of the book took place. It is like a bunch of short videos distilled down into a readable bite-sized form.

And it has a lot of organizational buckets for its ideas - The Seven Stages of Action. The Five Whys. The Three Levels of Processing. Yes, they sound like competing Martial Arts Schools, but Norman makes they all explainable and how they all fit in together. Indeed, he has the bits that look they evolved neatly into the "Flywheel" process that Amazon and other companies have adopting for product development and adequately using feedback loops.

And he lays out Norman's Law, which summarized, says "As soon as a project starts, it is behind schedule and over budget". Because I've been there, too.

Does he get everything right? Not completely. He uses his own book's organization as an example of text that can be read in any order, because non-fiction is different in fiction in that it is not yoked to a narrative through-line. However even nonfiction has a narrative flow in that it is making an argument and building its conclusions on previously presented material. You go immediately to the back of the book for answers, and you miss out on the logic that gets you there.

Also, amusingly, he sites as a example the continuing failure of the videophone, which showed up at the end of the 18th Century as a concept for long-distance communication, and continued to never take hold up through the 21st Century (There was an ad for the videophone that was shot in Pittsburgh, and they wheeled it out whenever they were pushing the idea). Of course, in the past year, that entire concept has blown up not by a dedicated device, but by the fact that everyone HAD to teleconference, and with it, the rules changed and suddenly people were zooming/chiming/discording/tiktokking and what have you, even though this expanded volume came out less than a decade ago.

However, in general I am looking at a great little book that is easily consumable, and packs a punch on design issues, and I will strongly recommend it for everyone in "da bizniss", as it was recommended to me. Go forth and be sensitized on the issues.