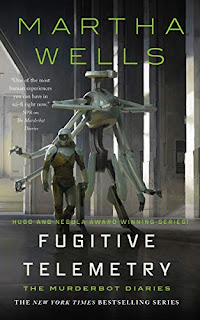 Provenance: Well of course I'm going to read the new Murderbot book. I've come onboard for this snappy series, and have stayed with it. Apparently, the book itself has branched, so now we have Murderbot novels, as well as shorter Murderbot novellas, which are the Diaries. In any event, when this one showed up I ordered it from Amazon in hardback along with two Shakespeare DVDs (King Lear with James Earl Jones and Much Ado About Nothing with Sam Waterston) to present to the Lovely Bride after tax season ended on 15 April. Then they pushed back the deadline a month (which, and this may surprise you, did not endear the IRS to all the tax preparers), so it was mid-May before I gave them to her. And she promptly devoured this one. Then I got to read it.

Review: Over in the Mystery genre they have what they call a "cozy". There are number of related definitions of it, but is usually involves an amateur detective, usually female, usually grudgingly accepted by the professional force, who accidentally discovers murder most foul, but in general has a low threat level and well-known surroundings and a supporting cast. Miss Marples and Jessica Fletcher are the best-known embodiments of the "cozy." Hardboiled writers like Chandler and Hammett HATED the cozy branch of their genre. But in the genre, a cozy is a comfortable read.

Fugitive Telemetry verges on the cozy. It stars our sarcastic friend, the Murderbot, and we are treated to their inner thoughts, which normally involving thinking about how stupid the humans are around them, and if they just spent five minutes not trying to get themselves killed, they could get back to watching pirated space adventure soap operas on their feeds. We are five books in (six counting a novel), and Murderbot (SecBot to everyone else, because, you know, identifying yourself as a Murderbot make fragile, squishy humans a little panicked), is no longer quite as bitingly sardonic, but comes off as cranky, verging on grumpy.

They also digress within their digression, and their personal asides have asides. Which as a writing style is rather contagious. Fortunately, I am resist to such influences (mostly).

Fugitive Telemetry is a mystery novel at its heart, in which the talented amateur gets involved, despite their better judgement. A body is found in a hallway of Preservation Station, the entry port for Murderbot's new home planet. Who it is, who dunnit, and how it got there are all unknown. Murderbot is asked by their friend/sponsor to check it out, because it might be connected with the evil corporation that wants their friend/sponsor and all of her poly/research family dead.

And grumbling, Murderbot agrees, having to deal with the head of security, who in no way is going to let Murderbot get access to all their mainframes, which would make the job a lot easier. Murderbot brings a lot to the table both with their hacking abilities and their basic assumption that humans at not the brightest tools in orbit. Murderbot's status as an artificial construct makes certain avenues of investigation (like talking to other constructs) blazingly obvious and overlooked by the more organic investigators.

Mysteries in SF (and in Fantasy as well) are difficult in that the author and the reader do not share the same baseline knowledge, and you have to explain the world without tipping your hand that this is why you explaining it. Or why this particular clue is a clue and not part of the world as people know it. In the Mystery genre, people have a basic assumption of how things work - the role of the police, the nature of evidence, how cars and guns work, general history, that sort of thing. In SF, you have to do a lot of groundwork to deal with the fact you are on a space station spinning in a vacuum with a number of different classes of man-made sentients running around (robots, AIs ships, SecBots, and the like), and and how that ultimately affects the story.

And it all works. Murderbot gets stuff wrong, makes bad assumptions, and goes down some blind allies before understanding what is really going on. And it feels ... comfortable. There a no dark bits of their past revealed, no major conspiracies, no serious revelations for the character. It almost feels like the pilot for a series on Netflix, where the Outsider installs themselves as the specialist that Station Security brings in for big cases. So Murderbot doesn't have to deal with the paperwork, just with the cool stuff.

And it makes for a comfortable read. Not quite a cozy, but you can see it from there.