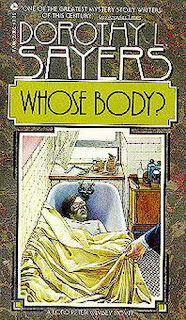 Provenance: The volume has an embossed stamp "Library of Janice Kae Coulter" on the first two pages. Ms. Coulter is the spouse of fellow blogger Sacnoth. I do not know whether I plucked this volume from their collection before it went to the Page Turner, or purchased it there for two bucks and change (I suspect the latter).

Review: This was one of the Books on a Plane, but I found I had too much to say about it to just stack it up against all the Rex Stouts, so it gets its own blog post. This post deals with meta fiction, introducing characters, why Raymond Chandler may have really hated Sayers' work, and anti-Semitism. Buckle up.

Here's the precis: London after the Great War. A wealthy Jewish financier goes missing. A dead body is found naked in a bathtub.The body is not the financier's, but there is a surface similarity between the two.The police assume initially assume the bathtub body IS the financier. Lord Peter, brought in by his mother because she knows the person whose tub the body was found in, knows better.

This is the first appearance of Lord Peter Death Bredon Wimsey, and he springs onto the stage (mostly) fully formed. He had solved a previous (unrecorded) case of missing emeralds, and so already had contacts with the police as a helpful meddler whose societal privilege gives him access denied to the hoi palloi. He also has a "kit" that Batman would approve of - his cane is a measuring stick and has a concealed blade and his monocle is really a magnifying lens/ He has a dutiful manservant who is a camera buff. Lord Peter saunters in fully prepared to get involved.

While he does so, Lord Peter also talks about detective stories in a very meta way. "Were this a detective story..." the line starts, and then mentions and discards some trope from the fictions. Sayers denies some of them and plays with others - for example, witnesses never remember what really happened on a date two months ago, and the proceeds, with almost casual conversation, to show Lord Peer wheedling the information he needs out of a witness without the witness realizing it. Yet Sayers herself embraces a lot of other detective tropes - the incompetent police inspector, the blind alleys, and the dutiful details of inquest and exhumation.

But when Lord Peter solves the case, something happens. He finds the solution, but in the process suffers a nervous breakdown because the solution challenges a lot of his privilege. His recognition shakes him to the core and unleashes his PTSD from the Great War. In game terms, he blows his San check and has to go have a lie-down for a couple days. This is VERY not in keeping with traditional mysteries, in that the protagonist can get angry, vengeance, shot up, physically damaged, but never suffers a mental collapse (Stout has Wolfe occasionally go into a "Fugue state" when stymied, which feels like little more than writer's block).  This is so different from the muscular American detective stories, that I can see why Chandler didn't like Sayer's work much, though he chalks it up to being "boring".. We know beans about the personal history of his Continental Op - Lord Peter has wounds deeper than most of the other characters cans see.

In doing the research for this review, I came across accusations of the author's antisemitism, and this book is used as evidence both for and against. On the "for" side we have the missing financier being Jewish, and one of the positive figures, Peter's mother, going into a "Very good people" sort of speech which hauls out a lot of differences between the Jewish community and God's Own Anglicans. On the other hand, the missing financier is practically lionized for his kindness and modest living (no Shylock, he), and one of Peter's archtypical upper class friends, practically fresh from the Drones club, talks about wanting to marry the victim's daughter and convert to the faith. And there a servant who is pretty deplorable in his statements, but he is held up as being a low character who is drinking Lord Peter's best brandy. The challenge is, does, in talking about an "othered" portion of the population, does that make you vulnerable to engaging in the same forms of prejudice? Is reporting prejudice the same as perpetuating it?

The meta research here on Sayers does me no good as well. Sayers' long-time companion was Jewish, she notes that the financier was one of the few good characters in the book, and in an early draft Lord Peter recognizes immediately that the body in the tub cannot be the financier because it was circumcised (which would be kinda obvious and make the police look EVEN dumber). On the other hand, Sayers developed into a Christian apologist of CS Lewis stripe, and the work she is proud of is a translation of Dante (which features heavily in the opening chapter of this volume).

Ultimately, I am going to render a Scottish verdict of "Not Proven" on this one, but there may be some reference of her endorsing the Elders of Zion out there without me realizing. it. I do remain committed to the idea that Sayers does not write detective novels so much as novels which feature a detective. And I will stand behind that one.