Book: Whom the Bell Tolls 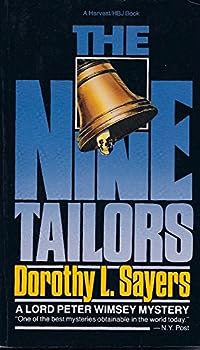 Provenance: Picked up at Page Turner Books down in Kent, took with me as an airline read.

Review: I've said before that Dorothy Sayers mysteries are about other things, which just happen to have a mystery, a murder, and a detective mixed in. Murder Must Advertise gets into the weeds with advertising and office culture. Unpleasantness at the Bellona Club deals with men's clubs and the casual damage from the war. The Nine Tailors is a mystery that involves deep discussions of  bellringers and water management in the fens of East Anglia. The full title is The Nine Tailors: Changes Rung on an Old Theme In Two Short Touches and Two Full Peals.

And I'll be honest, the book put me to sleep on the trip back from Florida. I don't sleep on planes as a rule, but it put me under for a good two hours.

That's not bad in any way, shape or form - if there is anyone who can write about bellringing and East Anglian fens, Sayers is the person to do so. But there is a lot of text to be waded through, and much of it steams of a writer showing off their research.

So here's the general gist of it. Lord Peter Wimsey and his manservant Bunter get into a car accident near the village of Fenchurch St. Paul. They are taken in at the local vicarage, and Lord Peter lends a hand with a nine-hour ringing session of the church bells for the New Year. He stays for the funeral of the Lady of the local manor. He returns a few months later for the funeral of the Lord of the local manor, but when they open up the Lady's grave to inter the Lord's body, there is another unexpected body in the grave.

There are more tropes here than in an episode of Murder She Wrote. The befuddled minister. The town fool who speaks in riddles. The old-timer who remembers everything. The busybody who is incensed about the placement of the mourning wreaths. The young heir with the grumpy uncle. The well-meaning souls who cover up for those they think guilty. The key piece of evidence destroyed by someone washing up. The body where it shouldn't be. The missing emeralds. Add to that clues which are in code using the script of campanology and the ever-present threat of flooding in the fens, and there is a lot going on here.

Lord Peter does his detective thing, but he almost feels incidental. He doesn't have much of a character arc for himself in this one other than to hunt down clues and make deductions. He's not in his native clime, but adapts well, people like him, no one is really working against him. He sort of Mary Poppins his way into the lives of those at Fenchurch St. Paul. By this time (9 books in), Wimsy's personality is pretty much crystalized, but his reaction to a sudden flood (which gives him the final piece of the puzzle) still feels overwrought and unexpected.

Oh, and the nine tailors of the title are not about men making suits, but about the nine tolls of the bells to commemorate the death of a man.  There is a lot of jargon within the book, particularly about bellringing (more exactly, change ringing), and it is easy to lost in the Stedman's Trebles and the Grandsire Triples..

Mind, Sayers can write, and she writes up a storm. Her writing is eloquent and literate. If you are forced, through circumstance or at gunpoint, to read a mystery featuring bellringing and water management in the East Anglian marshlands, this is as good as you're going to get. This volume has a reputation as being one of her best, and if you love it, you love it utterly, and if you hate it, it is one of the worst. I would not make this a first read for the series or the character, but it stands well of its own right.