Provenance: Half-Price Books. When I am in a used bookstore, I check the mysteries to see if there are any Rex Stouts I am missing. In the same area of the alphabet I found this Donald Westlake in trade paperback format. 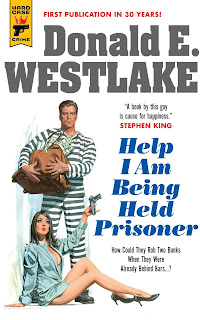 Review: So, Donald Westlake is an incredibly accomplished author, and wrote the original Parker novels. He also wrote the novel The Hot Rock, which became the film of the same name with a screenplay by William Goldman, starring Robert Redford, George Segal, Paul Sands, and Zero Mostel. Funny movie. So if you want funny crime stories, Westlake has you covered. And the original publication of this book falls hard on the heels of The Hot Rock movie, so there was probably a demand of funny crime stories.

And it is a prison fantasy, in that it takes place in a prison, but is scripted in a way that breaks your sense of reality if you think about it too hard.

The unfortunately-named Harold Künt (with an umlat - it just gets worse the longer you look at it) is inveterate and uncontrollable practical joker whose latest stunt on the Long Island Expressway gets him sent up the river for a short stint. He falls in with a band of tough guys who have tunneled out of the prison, but they are not planning an escape. Instead they leave the prison, commit a few crimes, go out to dinner, take in a movie, then come back for roll-call. Harold accidentally and easily crashes the party, and after some deliberation, the tough guys take him in because they have a big plan - they are going to knock over not one, but two banks in the town the prison is located in, then come back to prison because that's the last place anyone would think to look for criminals.

And we're ignoring stuff like, you know, fingerprints. Like I said, let's park reality at the door for this one.

Its a fun, light read. Harold is a nervous wreck, trying to keep himself from committing any more practical jokes, plus keeping the gang's secrets, plus dealing with someone else pulling practical jokes and him taking the blame, plus trying to keep the gang from finding out that he is NOT a tough guy, plus desperately trying to keep the gang from robbing the banks. So most of the book consists of him going to greater and greater lengths to keep all the balls in the air. Sort of French farce, with a lot of door slamming, but the doors have bars on them in this case.

I have to call out the Paul Mann cover of this one, only because, in the tradition of hard-boiled mysteries, it conveys the theme while misrepresenting what is going on inside the covers. The protagonist is a broad-chested he-man dressed up in classic hamburglar stripes (he is not, and the book is set in a period of Folsom prison denims). The babe is all legs and bare;y-buttoned men's shirt (there is a love interest, but not as dolled up) with an obligatory gun - It is something something off the old Carter Brown covers by Robert McGinnis.

So, it is a fun book, and a nice break from change ringing in the fens of East Anglia, but not one to hunt down.