Book: A Sudden Case of Death 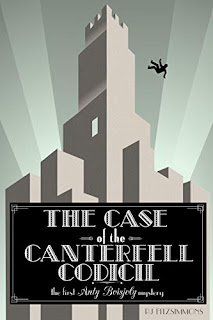 Provenance: A Christmas present I purchased, then entrusted to the Lovely Bride to deliver to me on the day itself (I in turn order clothes that she has specifically noted in catalogs, wrap them and return them to her - it is a system that works). The book was endlessly flogged on Facebook to me, as the Mighty Algorithm had determined my interest in mysteries of the interwar years (of course, if you read this blog, you might determine that as well), and I was curious.

And the book,  apparently self-published, cuts free of the stuff and nonsense of modern publishing process, allowing the tiller of the literary fields to deal direct with the consumer with a severe reduction of middlemen and gatekeepers. A farmer's market for literature! Huzzah the revolution!

The Review: And how was it? Not too bad, but not as strong as it was hyped. The book was oversold, promising a collision of Wodehouse, Sayers, and Christie. A high bar to be sure. The frothiness of Bertie and Jeeves, the eloquence of Peter Wimsey, and the clockwork plotting of a Miss Marples cozy, all compressed within its covers. Demanding such comparisons, however, reminds the reader the the originals, written in the era itself, are well-remembered classics for a reason. My expectations were high, and while the end result was a romp, it does not measure up, and left me a bit disappointed.

Anthony "Anty" Boisjoly (Boo-Juhlay) is residing at his club when a telegram from his old college pal summons him to Canterfell Hall, where the much-disliked Uncle Sebastian has just taken a header out of an upper-story window.  Anty arrives at  Canterfell to find a cross between Blandings Castle and a Poirot-inspired railway trip. Mysteries abound, small and large, starting with a locked room mystery and spiraling out from there.

Anty as a character falls between two chairs. He is neither the cloth-headed Bertie Wooster nor the supreme intellect Lord Peter, but exemplifies traits of both, depending on the situation. So it is hard to get a handle on him as he sometimes lumbers through some scenes, then has flashes of brilliance and glory. If you're going to ape Wodehouse (*cough* The Wyvernspur *cough*), you have to catch his ear for banter, and some of the chat falls more into the Realm of Monty Python and Blackadder than into the era itself.

Also, in presenting Wodehousian descriptions, there is a much of muchness, which makes you appreciate Plum's tact and reserve (there's a line I never expected to write). Every briar patch and weir, every doorknob and newel post, gets an achingly florid string of similes and comparisons. Sort of like being trapped in an esoteric comedy routine from the 80s.  Also, there seems to be a decided lack of synonyms for the word "thatch".  In a similar fashion the mysteries sort of pile up on each other, as EVERYONE has a secret or ten. The locked-room death of Uncle Sebastian, the nature and location of the titular codicil, the disappearing painting, the horrible dinner and excellent breakfast, they just tend to pile up over time. But yes, they all get answered, to some degree, by the end.

Does Fitzsimmons play fair with the reader? Mostly. Some of the brain blasts that Anty gets are based on previous information that he, the character, does not share with us, the reader, until the time for the reveal (such as how an off-handed complaint from an Police Inspector tells him that a member of Parliament is lurking about). And the cause of the first death is less of a well-executed plan and more of a random roll of the dice. Yet it barrels along merrily to its resolution.

As a self-published work, the book's production values are high. The cover has that slightly tacky plasticized cover which continues to disappoint me, but I am afraid that, publishing-wise, that ship has sailed. The cover is a stylized art deco with a metro-retro font (also in the chapter headings). It coulda stood a map, to be honest, to position various rooms in the manor correctly (which Nine Tailors did), but that is a minor point.

So will it leave the major publishers quaking in their boots? Not really, but that's OK. It is a pleasant enough volume, and I would recommend it above the recent Westlake. If you approach it as a lark and paean to the previous masters, it is fine. But I would be very wary about the ad copy in the future.