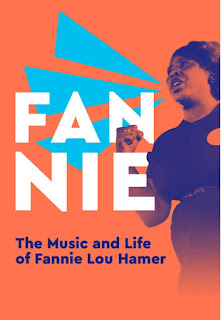 We are back in-person at the Seattle REP. Properly masked, cards checked, program book not handed out by the ushers but instead piled neatly by the door, snack bar serving water only. They've made some physical modifications in our absence - moved the audience doors at the Bagley-Wright, changed the angle of the aisles, and remodeled the men's room (European style doors, and where did the urinals go?). The house was about a third of normal, even on the main floor. And we start with a tough play - it is short but extremely heavy.

Fannie Lou Hamer was a sharecropper who rose to champion voter's rights during the civil rights marches of the 60s. Her voice was loud and clear, and she spoke at the 1964 Democratic Convention against the (all-white) Mississippi Delegation (her televised speech was interrupted 18 minutes in by an announcement from LBJ). The play is a one-woman show, and on this Sunday afternoon we got the understudy - Shaunyce Omar, who commanded the stage with the verve and directness of an old-style country preacher.

The play carries the DNA of black heroine plays like Nina Simone: Four Women (which also featured Shaunyce Omar) or Shout Sister Shout (about Sister Rosetta Tharpe, and by Cheryl L. West as well). But Fannie Lou Hamer was an activist, not a musician, so the musical portion is take up with other people's hymns, gospel, and protest songs of the era. In that way it resembles the "feel-good-old-timey" fair that sometimes pops up in the rep, often with depression-era songs. This confluence is ... odd. Hamer's speeches were full of hymnal references and church-speak, but transforming her fully into a creature of song didn't quite work for me.

Shaunyce Omar was in fine voice, though, and backed up by a trio behind her. She interacted with them and with the audience with a practiced hand, pulling them into her story. And the story gets bleak in places. We are talking about Civil Rights in the American South in the 60s. The play pulls no punches with the brutal violence of small frightened men who define any attempt at equality as a threat. It is tough to watch, but important, and vital to Hamer's story.

Jim Crow has transformed but is by no means gone. He goes by James these days and works more within the system to keep the system from getting TOO equal. But people are still burning churches (and mosques. And temples), and have traded in the hoods for polo shirts and tiki torches. And attackers get caught only when someone videos them. And when these arsonists and racists and attackers do get caught, the secretary disavows all knowledge of their actions. And folk are still trying to suppress the vote. It has been 50 years since Hamer lost the mike, and  we've still got a long way to go.

The play is solid, and does Ms. Hamer well, restoring her at the end to the podium she was denied at the start of the play. But this is not the happy ending you want for her, not the redemption and apology she deserves. But its a good view into the era for those who were not there and hope we have become better, much like the Depression-era plays are for me. And maybe Ms. Hamer will get a coin out of this.