Here There Be Dragons: Chasing My Voice by Felicia Loud, Directed by Mathew Wright, Arts West, through 14 August, 2022 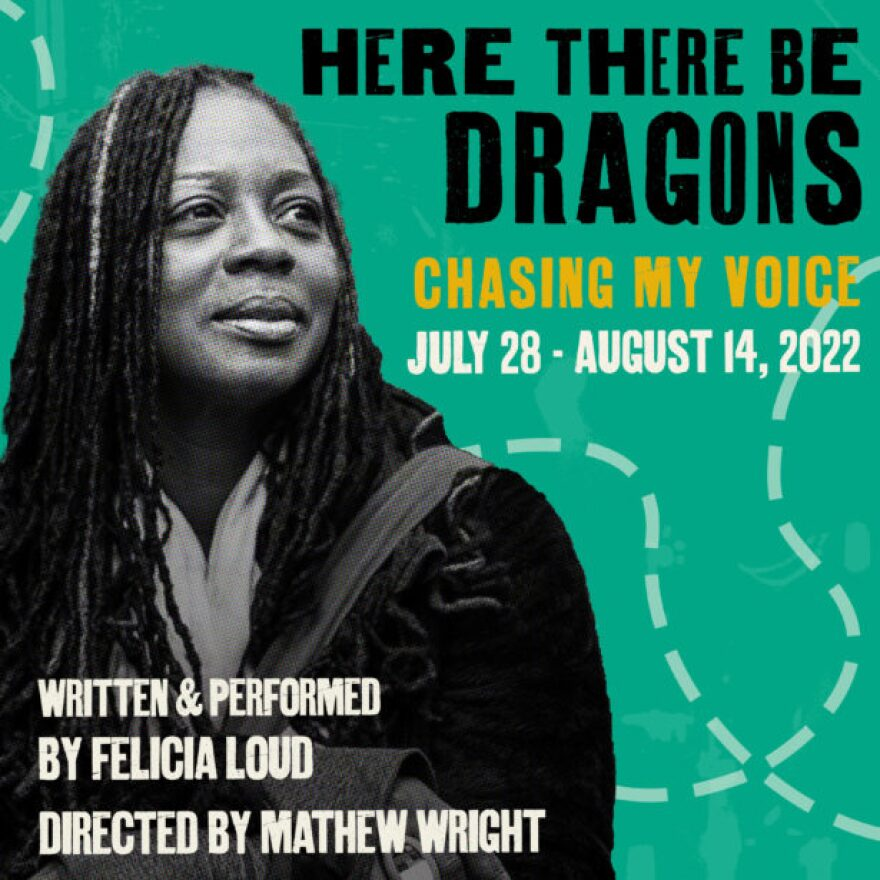 Those who follow this space know that I go into plays fairly blind. That's one of the pluses of a season subscription - you  have a dinner date, but you don't exactly know what's on the menu. So what I had here is a name and the meta-knowledge that most of the season so far has been involving myths and monsters. So I am expecting some sort of "teenagers playing D&D kinda Stranger Things" performance.

Yeah. Didn't get that at all. Instead I got a memorable live rap show that pulled the audience out of their seats.

Felicia Loud is a local figure in Seattle music and theatre. She has been on the major stages in town. She has taught. She has performed for about 40 years. She's been on KEXP and KUOW. Most recently she is half of Black Stax, a longstanding local rap group. I knew none of this coming in. What I found out is that she's damned good, with a great voice. She blows onto the stage with a coat of many colors and silver boots and takes no prisoners during the performance. She's admirable backed up by musicians Cydney Johnson and Greg Fields, each with their own rig of drums and synths.

The show itself, a surprisingly quick 90 minutes, opens with part memoir, part lounge act, as she tracks her past, from Texas to Seattle to Lynnwood (where she was "the black kid" in a predominately white class) to the Central District. She talks, she jokes, and she is in an excellent position to judge the differences between black and white popular culture. And she does, bringing the audience in and talking about Garfield High.

(Now, as an aside, places like the Stranger refer to Seattle as being a whiter-than-white city. That's both true and false. Seattle is about 59.5% white, King County 54.2%. Those aren't overwhelming numbers. But it is a less-Black city than a lot of other places (6.8% and 6.5 %), And traditional practices such as redlining have kept the African-American population confined to certain areas. That is changing. The thing is, when the Stranger and others framing it in a binary terms, it erases a wide expanse of other PoC  - Asians, Native Americans, Latinos, and  Pacific Peoples. Anyway, thanks for coming to my TED talk.)

Anyway, the opening half is chatty, bouncy, and folksy. And then we start talking about rap and hiphop, and the potential difference between the two, and she brings in her parter in Black Stax, Jace Ejac, and the party gets really rolling, with the two of them wrap up the show with some killer rhymes and beats.

This was good. This was great. It engaged me more than Free Style Love Supreme at the start of the Rep season, and had more authenticity that Fannie Mae Hammer. Part of it is the raw positivity of Ms. Loud. Part of it in the venue - Arts West is a small theater without a lot of places to hide (And yeah, she called out a patron that had to make an exit to the bathroom). She asks for engagement and energy from the audience, and she gets it.

And to honest, the audience was typical small theater in Seattle - greyer and paler than your standard rap venue. And that's a pity as well, because this is good stuff, and gives me a good feeling about the life in the Central District at the turn of the last century. Worth sharing, worth attending.

So how was the season in general at the Arts West? Here There Be Dragons was a highpoint, as was Justin Huertas' We've Battled Monsters Before. I thought Alma was solid. I liked the This Girl, though the Lovely Bride disagrees. Miku and the gods was all over the place for me, and Monsters of the American Cinema was sabotaged by its staging. So in general, good marks for the Arts West, and I appreciate them trying new things. I look forward tot he next season.