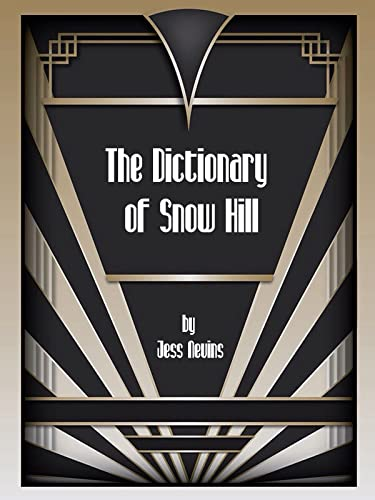 The Dictionary of Snow Hill by Jess Nevins, 2022

Provenance: Another book recommended by Facebook ads. I get a lot of ads for books on Facebook, so the Algorithm has me pegged.  Yeah, I'm getting worried about that as well. This one caught my attention because of the Author - Jess Nevins. Nevins has written one of my favorite reference books (You have a favorite reference book, right?): The Encyclopedia of Fantastic Victoriana, as well as doing annotations on things like Alan Moore's League of Extraordinary Gentlemen comics. So, yeah, he comes from a good background, so I'm in.

Review: This is a love-letter to Pulps of the 20's and 30's, with parts spilling over to before and after that era. Set in the Maryland city of Snow Hill, the largest and shiniest city in the US, it is a collection of tales involving Science Heroes and Villains. This is tropes gone wild, and features a host of familiarish players - Micheal Ferrum, the two-fisted "Doc Bronze" and his Sensational Six, World-famous Consulting Detective Havelock Blake, the Shadow-esque Laughing Monk, along with talking ape detectives and luchadors. Roman a clef with the predecessors of the super hero universes.

Yes, it is a madhouse, literally so in places. There are invasions from other planets, inner worlds, and undersea menaces. Lovecraftian horrors abound (and we have the Doctor Strangish/Inner Sanctum magician named Anton Weird in the mix as well). It is a world where all the heroes of the pulps are all active at the same time, sharing the same universe and the some of the same enemies. Physics itself tends to bend around such challenges.

The format is in encyclopedia format with rough alphabetization. Entries are narrated by different in-world inhabitants, so we have unreliable narrators throughout. Radio scripts, media articles, and personal memories all mix and twist. Being an overview of the various characters' careers, many of them end badly. Particularly there is a lot of reference to the events of June 21st, 1937, a solstice where many things go badly for many, many people. This is the ongoing narrative that stretches throughout the book, the approaching cliff that the characters are hurtling towards.

So, does Nevins gather together the collected strands and resolve them? He has been an annotator of a lot of Alan Moore's work, and Moore has had challenges with stories not so much resolving as running out of pages, and of playing nastily with his creations. Does Nevins "stick the landing"? Yes, in part because of the unreliable nature of his narrators and the who is giving information when in the book. There are a couple tweaks and twists, but the book delivers.

The Dictionary of Snow Hill entertains and delights. It would make a solid sourcebook for a era-specific superhero gaming campaign. It feels very much like Kurt Busiek's Astro City comics - Set firmly within its genre, with characters whose archetypes are easily identified. It's a great read if you remember the pulps, and worth checking out even you don't.