Theatre: Tuned to a Dead Channel 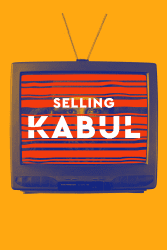 Selling Kabul by Sylvia Khoury, Directed by Valerie Curtis-Newton, Seattle Rep through 22 May

This one is rough. It is a challenge. It was also the best production of the year so far.

Part of the challenge is subject matter - a play about Afghanistan so soon after the recent departure of US military support, the collapse of its government, and return of the Taliban. And part of it because of the characters themselves, all of whom are confronted with the ever-increasing danger resulting from the lies they tell to protect each other. You empathise with them and and internalize their peril.

Taroon (Yousof Sultani) has been hiding in the apartment of his sister Afiya (Susaan Jamshidi) and her husband Jawid (Barzin Akhavan) for four months now. Taroon worked for the Americans and is hiding from the rising Taliban. Jawid is making uniforms for the Taliban in exchange for their protection. Afiya is trying to hold everything together, including keeping Taroon's presence hidden from the outside world, which is embodied by friendly/nosy neighbor Leyla (Fatima Wardak). At the start of the play, Taroon's wife has given birth to their son in the hospital, and Taroon is willing to risk everything to see them. However, the Taliban has people at the hospital looking for him. Afiya want to keep her brother alive.

And from there is just gets worse for everyone involved. It is a slow burn as the truth regarding the devastation from the authoritarians is revealed, and as the knowledge of the danger to the major characters is slowly leaked out. The risks ratchet up, the potential dangers increase, and the collateral damage is high.

The actors are excellent. Most of them are "making their Seattle Rep debut" with the exception of Wardak, who had been in A Thousand Splendid Suns from the Rep a few years ago (and which is being apparently being turned into an opera). They embody their characters and their secrets with grace and humanity. Jamshidi as Afiya is the heart of the play, as she struggles to work out the most survivable results in an ever-darkening landscape. The set is no-nonsense, will none of the flying props or multiple levels we've seen in other Rep productions. And the directing is subtle, direct and well-placed. As I said, it is a slow burn.

This is a bleak play. Much bleaker than Ghosts, and much, much more immediate. There are fewer laughs at these characters, less distance between us and them. The performance is gifted with excellent actors, a tight script, and spot-on direction. I really, really don't want to take it apart and analyze why it works right now because it really connected and affected me. So yeah, with all the caveats that this is not a musical, not a blast from the past, not a retelling of another better known play, but is really solid, good theater. Just don't expect to feel good about it afterwards.