No Quarter: The Next Gen I

So, I don't know if I really want to go on with this blog's ongoing practice of talking about collectible quarters, but old habits die hard. After the States Series and the National Parks series, the US Mint has launched a new collection of collectible/commemorative quarters. And it was pretty easy to mock pictures of birds and mountains and the mudflap that Wyoming used for its quarter. But this new series is on famous American Women, some of whom have passed on in recent memory. So I think I will walk a tad more respectful this time out.

Originally, this was supposed to be similar to the previous currency series, in that each state would get one woman to brag on, but that was revised because they want to do a sesquicentennial (250 years) set in 2026. So we get four years of famous women for 20 total as opposed to 50 national parks/monuments/seashores/parking lots. The idea that women get about 40% of the attention given to other subjects is such an American Thing.

But as I said, I'm going to walk a little more carefully, in part because a lot of these women are unknown/forgotten/ignored in the standard narratives. Also, I'm going to go out on a limb and say that the majority will be from the twentieth century, as opposed to something from the Civil War era, in part because women have been unknown/forgotten/ignored in a lot of traditional texts.  I'd like to to concentrate (and mock) the design a lot more than the subject matter, and to encourage readers to follow the links to learn more in detail of these remarkable women. 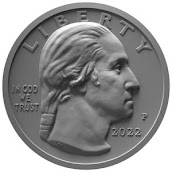 But first off, let's talk about the other side of the coin, literally. The side with Washington on it.The face/heads/obverse of the coin has made some major changes, and some minor ones. Big one you'll probably notice - Washington is facing the other direction. Also, the sculpture is from a 1931 dollar, and you can see differences in the artistic approach (George has an even thicker neck, and the rat-tail at the back of his head is more pronounced). Also some of the text has switched sides - The denomination and United States of America are now on the other side, and the year moves back to being on the same side as George. As a result the reverse side does have more text to deal with as it previously had

Anyway, I am not expecting a lot of coins to get a review below C (They have gotten much better at it over the past 20 years), but here are the review levels.

This is a strong lead-in, both from subject and presentation. Maya Angelou is known for her autobiographic works and her poetry, but also for her work in Civil Rights. Now I Know Why The Caged Birds Sing is pretty much a standard text for a generation of English classes, and she was the second poet to read one of her poems at a presidential nomination (the first was Robert Frost, the most recent was Amanda Gorman).

Her pose is dynamic and evokes Caged Birds in its presentation. I really like it because, right off the bat, it gives us more than the standard portrait and creates an active presentation for the coin. She is also the first African-American woman on a coin. Buckle up, there are going to be a lot of firsts in this series.

It is no longer big news to have women in space, but Sally Ride was a big thing back in the 80s - the first (American) woman in space. I know - it took us THAT long to put a woman in space, but hey, equality has always been a process. She is also the first known LGBT person on a US coin (get back to the closet, Buchanan - your family burned all your correspondence, so we're still not sure about your status, shy of a seance).

The coin itself is, well, OK. Sitting portrait along one side, big globe in the background, bit of a swirl that evokes orbit and window on the shuttle. Its a pretty nice quarter, but nothing that makes me really engage with it.

No jokes on the name, please.While there's a good chance you know about Maya Angelou and Sally Ride, now we get into more esoteric heroes. And its a pity, because Wilma Mankiller's background is impressive, including both Native American activism in California and Oklahoma, and as a chief of the Cherokee people.

The coins are already settling into a comfortable type - figure on the left-hand side, shown torso up, symbology in the background on the right-hand side (A symbol of the Cherokee nation,  all contained by a circle with all the required data. I think we are going to lose her note as Principal Chief and the Cherokee words beneath in the folds of her shawl. It is a very busy coin.

We are probably going to see a lot of suffragettes, particular for those famous women born before 1900.  Maria Adelina Isabel Emilia "Nina" Otero-Warren is the oldest representative of this crop of coins, and her achievements span politics and education. She argued for bilingual education and was the first Latina to run for the US House of Representatives (as a Republican. She lost). She is the first Hispanic-American portrayed on US Coinage.

Like Mankiller and Ride, we see the sitting portrait on the left side of the coin. In addition, there is a LOT of text - in addition to the stuff shoved onto this side from the obverse side, we have Votes for Women on this side, which to some folk is STILL a controversial subject.  Plus a collection of Yucca flowers to represent her native New Mexico. I think it is going to be a cluttered quarter, much like Mankiller's. One good bit - her head does break the plane of the surrounding circle, making it a bit more dynamic.

Wong Lui-tsong is the first actress on the group, and a pioneering Asian-American in the film and TV industries. That's good. However, a lot of her roles were very much in the stereotypical vamp/dragon lady that smacks of Orientalism and exoticism, so that's a little less good. Plus the fact that a lot of early work are "lost films" that have not survived into the present day, and her ground-breaking TV show was on the now-extinct Dumont network, and few records exist of it as well. Yet she has been recognized for her work in recent years, as well as her work for the Chinese-American community.

The quarter itself is exceptional in that it gets away from the already-trope of the previous three with a closer headshot that plays off the natural beauty of Ms. Wong. This is a very stylish coin that feels like a silent movie poster of the era. I like it.

That's it for the first batch - tune in next year for five more, and keep checking your change!