Today we celebrated the Monkey King's birthday at Salty's at Alki, which lays out a good buffet spread that negates the need to nosh for the rest of the day. After dropping the Lovely Bride of at home, I headed for the Frye Museum, which I have mentioned before, in usually positive terms.

The museum's core collection is German-American art, and bridges the growing gap between the traditional art of mid-century Europe and the growing independent art movement, now called secessionist. The Munich Secession was the first of these, but followed by similar movements in the other major cities.

It sounds similar to (and slightly after) the rise of the Impressionist movement in France. But while Monet and his mob were rebelling against a hidebound salon system, the Salon de Paris and the the Academie De Beux-Arts, the Munich Secessionists were fighting against a slightly different animal. The Secessionist's foe was the Kunstgenossenschaf (nearest translation I've gotten - "Art Cooperative"), which was the officially approved art system instituted by Ludwig II of Bavaria (also called Ludwig the Swan King or Ludwig the Mad - yeah he's the one who was a patron of Wagner and built all those cool castles).

What the Secessionists railed against was a format and rules set that favored fairness and diversity over (what they thought was) artistic brilliance. The rules prevented back-to-back winners, no more than three awards to an artist in a single category, and awards given once per fifty entries, regardless of the quality of those entries. Worse yet, the Kunstgenossenschaf sold beer at the shows and encouraged the lower classes to engage with art.

The Secessionists, far from pioneers seeking to expand the definitions of their craft, come off more as elitists who were trying to put some distance between themselves and the hoi-paloi. By the same token, the Kunstgenossenschaf sounds a bit like self-esteem camp for artists, pushing a populist and big-tent approach to social interaction with art.

Anyway, the Munich Secession is a mixed bag of styles, varying according the nature of the artists themselves. Franz von Stuck, Fritz Von Uhde, Richard Riemerschmid, Max Liebermann, and a lot of other names you haven't heard of unless you make put ponts into you Knowledge (German Artists) Skill. Part of the reason was that the Impressionists got better press, and sadly part of it is noted that many of the artists bios contain the lines "and then WWI broke out" or "had to flee Germany when his art was declared decadent in the '30s"). These were the artists that occupied the space between the state serving art (with Ludwig's attempts to culturally educate the masses) and art serving the state (with the rise of National Socialism). 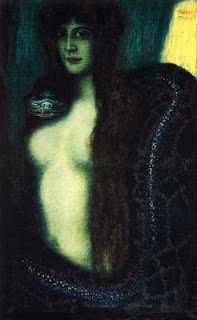 The painting are laid out "modern style" as opposed to traditional "salon style", which means a walk between considering each art piece. Von Stuck's "Sin" is there, which I suppose is the prize of the Frye collection, because it is ALWAYS turning up (when they were talking Napoleon, she was used as an example of Orientalist themes in 19th century art). The piece itself is to me almost Lovecraftian - a blue-white nude with long hair and a steely glare regarding the viewer, a python draped across her shoulders, the python ALSO regarding the viewer with a particularly Innsmouthian look.

I digress. Despite the unity of origins, you can see a diversity of artists as fractured as pre-Bismark Germany. Also included are smaller exhibits of non-Germans invited to exhibit with the Secessionists (who were by the time treated on an equal footing with the Kunstgenossenschaf)and of Americans who studied in Germany. All in all, a nice trip through the end of the 19th Century, and pointing up the Frye's strong points. It is a small museum, but well worth the time. Check it out.