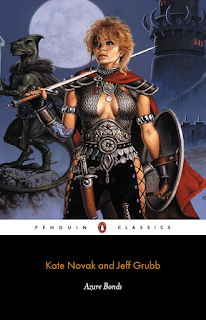 So, in my wanderings, I found a site that allowed you to make a cover that looked like one from Penguin Classics or Oxford World Classics, which have very distinctive looks. So I made one, and the result is over on the right. And I thought it was pretty good for five minutes work.

And the universe being what it is, I posted it to my Facebook, and got a lot of response. Some of it was from people who really loved the original book (which is greatly appreciated) and those who played the computer game based on the book (which is also nice) and those wanting to know if it was a real book, and was Penguin about to release on the world the old FR books from decades back.

Which is, alas, untrue (so far as I know it). It is a little amusing, in that, back in the day, Penguin WAS the British publisher/distributor of the books (I don't know when/if they stopped, but I had a number of British editions in the basement at one time). But it would be interesting if some small press picked up all of these old volumes and put them back into print (and, you know, paid the authors).

But as for me, I have taken a solemn vow not to speak untruths, even in jest, nor to taunt people with such tomfoolery. For more about this solemn vow, please click here.