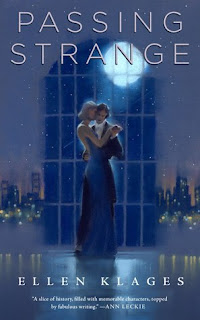 Provenance: This was in the big box of books I got from someone at TOR. I told that story here, when I reviewed Network Effect, so I won't go into the who rigamarole on that. But I still had a pile of books, and I picked this one off the top. It is the sort of book I might pick on recommendation or based on a review, but in all honesty it was on the top of the pile, and had an odd title and it was short.

Review: Wow, this is a gem.

This is one of those books totally make it worth the risk of reading an author you've never read before. Magical, mystical, and sweet.

The novel opens with an elderly Asian woman diagnosed with a terminal condition, putting her affairs in order. On the final days of her life, she rescues original piece of pulp art from its hiding place in the basement of a building she owns. It is the last piece of a legendary pulp artist, and she sells it to a rather repellent dealer for a great deal of money. Then she goes home and takes an overdose.

But that's not the story. Actually we go back to 1940 in San Francisco, and into queer subculture of the era and tell the story of the artwork. The artist is question, Haskel, has been midgendered by time - she is a woman drawing sensational pulp covers. She has a collection of friends, about half-a-coven, that include a scientist and her girlfriend, who has a bit of mystical ability in folding maps. The Asian woman in question, Helen, is there, who is both a lawyer and a dancer at a local tourist restaurant that caters to racial stereotypes near Chinatown. Into their orbit falls Emily, a young woman, newly arrived from back East with a wonderful voice and a talent for cross-dressing as a man named Spike. The artist, Haskel, falls hard for Emily. It is a love story cast against the background of San Francisco in the shadow of the war.

And the writing is wonderful. Klages makes San Francisco come alive. David Dodge gave us a collection of street names and called it San Francisco, but, Klages brings entire neighborhoods alive. You get a sense of wonder and delight, and yes, magic, that only belongs to certain places in certain times with certain people. It lifts you up and carries you forward and makes you really care about the characters.

Her writing about San Francisco sparked whole sequence of pleasant memories for me.. I am on the record of being neutral about LA, but San Francisco is one of those cities that I visited and said "yeah, I could live here." I remember visits and conventions and just wandering through this city and visiting friends and relatives in the Bay Area. San Francisco has always been magical and chimerical. It is Nova Albion and Emperor Norton and Sam Spade and Vertigo and the Cliff House and Tony Bennett. I have gone on record as being LA-Neutral, but San Francisco holds a particular charm for me, its own magic.

But there is darkness in the magic as well, as shown in the book. The local lesbian club, Mona's, solely exists by being a tourist stop for moralizing mid westerners, on the barest fringe of acceptability. The cops are crooked and the law is stacked against them.. Both the artist Haskel and the dancer Helen cater to public trafficking in racial stereotypes to make their living. Women in general, and lesbians in particular, are either invisible to the greater world or targeted by it. They are both integral to the world and outsiders to it.

The heart is the romance between Haskel and Emily. It is not just a slow burn. It smolders like exotic spice in a brazier. The fantastic elements of the tale are hinted at early, but actually arrive only towards the end of the book. In the meantime, we get a sweet, sweeping romance in the shadows, mature in a positive sense in that we are dealing with grown-ups and real feelings and all the messiness that that involves.

Passing Strange is one of those books that I want to press into the hands of others, because I think they will enjoy it. It has been out for a while, so it can be probably found easily. Treat yourself to it.