The Brief History of the Dead by Kevin Brockmeier, Vintage Books, 2006 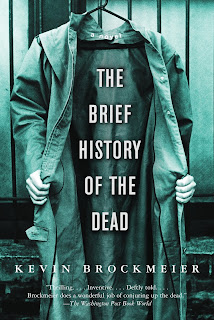 Provenance: This is a re-read: I read it many years ago and thought well enough of it to hold onto as opposed to pass on to others, intending to write something about it. Now is the time.

I think this was one of the last books we got from the Quality Paperback Book Club. The QPB was (and maybe is, for all I know) one of those monthly book clubs where they mailed you the selection and gave you a catalog with other options. And we were pretty happy with it when we lived in Lake Geneva, but once we moved out here, we were less and less interested in their offerings and finally opted out.

Apparently, QPB is an extremely shadowy group, and no one knows who is really running the works (the Book of the Month club is handling fulfillment, and a query to the Wikipedia dumps us there). It is sort of a book club Illuminati, an interesting piece of the publishing industry, a vector for moving print like a virus, but that is only tangential to the book itself.

Review:  To all outward appearances this is a traditional work of fiction - simple, raised, embossed silvered title, "National Bestseller" running along the top margin,  pull quote from the Washington Post Book World, artistic photographic cover design that would put it at home next to Midnight in the Garden of Good and Evil on the shelves. A little digging even reveals that its first chapter was displayed in The New Yorker.  A confluence of traditional New York publishing tropes that declare " This is a modern novel."

But it is a science fiction tale that hangs on a fantasy assumption When one dies, one's spirit/
identity/soul/existence transposed into a limbo, a City, where it continues on in the much the same way as in life, until the last person who remembers the once-living dies as well. Only at that point does the spirit move on to an unknowable future. So what happens to The City when a world-wide plague destroys humanity?

The tale is told on two fronts - The City itself, and Antarctica, where the last survivor of the plague - "The Blinks" - struggles to survive.  Those within the city are swept up with a huge tide of the newly dead, then are confronted with people disappearing as quickly as they arrive, the only ones who remember them are themselves brought down by the disease. The City itself is shrinking as well, as no one still living remembers it.

The survivor is Laura Byrd, employee of the Coca-Cola company, stranded in a former research stations at the bottom of the world. The world of the (now-near) future is as expected - the large mammals are all dead, the sea levels are rising, there is continual warfare, and bio-engineered plagues are common. Laura is there because of marketing - Coca-Cola pushing the idea that their sweetened soft drink is made with the last pure water on earth (yes, similar to the various bottled-watered claims). Ultimately, the soft drink is the vector to kill the world. Her companions die and she is left alone to try to get off the continent while the rest of the world succumbs.

The writing is first-rate, and the story carries through both from Laura's viewpoint and the community of the dead, who come to realize that their continued existence hinges solely on Laura's survival. They vary from long-time friends and colleagues and family to individuals she saw once and remembered afterwards - Laura's gaze is all-encompassing. While the plague burns the world, those who live on in her memory congregate in The City. But Laura is herself dying.

Back when I first read this, I was talking to a friend who worked in the New York publishing. "Why is is marketed with the monotone photos of New York's version of literature?", I ask. "Set in the then-future, talking about bio-warfare, discussing the afterlife. How is this not an SF novel?"

"Vintage does not publish science fiction," he responded simply.

Indeed. Yet even shorn of its physical similarities, the book holds forth with the vibe of  Stand on Zanzibar, The Sheep Look Up, and other end-of-the-worlders. In bringing it tightly into the orbit of Laura and the citizens of the City, it has an attraction that makes it worth reading, and then re-reading years afterwards.