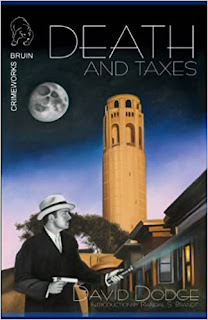 Provenance: Sometimes you just buy the wrong gift. The Lovely Bride is a professional tax professional, an Enrolled Agent, and we have talked over the years about doing a "tax mystery" novel. So I went searching to see if someone else had done this. And I was pointed to David Dodge, who would later write It Takes a Thief.

So I picked it up for the LB for Christmas (purchased from Amazon since I could not find it locally). She read a chapter and set it aside (her bookmark, a Christmas postcard from Japan, is still in place). So I picked it up and read it through. Yeah, this was the wrong gift. Let me tell you why.

And what I got ultimately was OK. Not what I wanted. The protagonist, tax accountant Whit Whitney, is hard-boiled to the point of being overcooked. He is a man of action. Women want him, men want to be him. The plot is two parts Maltese Falcon (partner gets bumped off, partner's wife and protagonist have feelings for each other) and two parts Thin Man (without Myrna Loy, which is one of the probs).  But I get ahead of myself.

Here's the tax part of the mystery: Before Whitney and MacLeod were partners in accounting, MacLeod handled the tax case of a former bootlegger. His bootlegging was past statute of limitations, but the bootlegger still owed taxes on the moneys he received. The bootlegger gets the ruling from the IRS, feels he has grounds to appeal, but dies before he gets a chance (Or tell MacLeod what those grounds were). Years pass. Now they are five days away from the deadline for appealing the fine. MacLeod discovers that yes, the bootlegger did have a case for an appeal, to the tune of half a million dollars, which would go his (beautiful) daughter, with a hefty percentage for the accountants who discovered this. And now MacLeod is murdered.

So, this is like the Thin Man in that we stay with the victim for a while, and MacLeod is a complete a-hole. He is mean to his employees. He is cheating on his wife. He bullies his partner. He is a jerk. There are therefore a lot of suspects who want dead, including, after a couple chapters, the author and the reader. And I can see why the Lovely B left this book to rot after one chapter. I was rolling my eyes after the second, but pressed on.

And it is OK. No, it is not the great first appearance of an author and character. I have no burning desire to know about Whit Whitney's further adventures or even to read It Takes a Thief. If you read it like watching an old black and white film you can manage it. There are a couple places where you say "Hey, wait a minute" for something that is just glossed over in the text. I guessed the initial murderer, and ultimately think I had a better idea of who was responsible for the later shootings (oh yes, there is a lot of gunplay in this book) than the author had. His handling of female characters is ham-handed at best, but the exist to support/tempt Whit Whitney, all-American accountant.

One of the stories told in the introduction is that Dodge was reading slushpile mysteries for his wife and said, "Hey, I can do that." And the fact that his wife worked for a publisher kinda gave him a leg up on the opportunity so publish said book. Similarly, reading encourages me to think that the LB and I could write a better tax mystery. So if that happens, this book is partially to blame.