Book: Looking At You, Kid 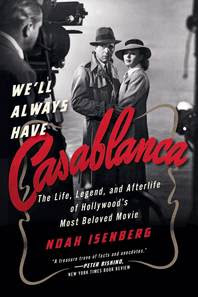 We'll Always Have Casablanca: The Life, Legend, and Afterlife of Hollywood's Most Beloved Movie by Noah Isenberg W.W.Norton & Co. Copyright 2017

The Provenance: Christmas present. The Lovely Bride was listening to Public Radio and they were talking about it, and since I am a fan of the movie (though, oddly, I rank it below The Maltese Falcon), she got me a copy. Started in on it that week, made a good head of steam, then bogged down around the discussions with the censors. The book lay fallow, and risked being added to my shelf of abandoned books, but I picked it up again and polished it off, in bits and bobs, over the next week.

The Review: This is one of the great classic movies. If you haven't seen it (a state that would leave me shocked, simply shocked) you need to take the opportunity to do so. If nothing else, you'll get all the references that everyone else is using.

The book itself doesn't really talk about the movie so much as talks around the movie. Originating in the play "Everyone Comes to Rick's", the story was first and foremost a political play by Murray Burnett and and Joan Alison, based on their experiences getting out of pre-war Europe and smuggling a good chunk of the family treasures with them. Purchased but unproduced, it went west to Hollywood, where it was swallowed by the industrial Hollywood movie machine.

It busts some myths as well. Ronald Reagan was never seriously considered in Bogart's role. It originally lived as a play, though unproduced in part because of the problematic love story (Ilsa sleeps with Rick for the letters of transit). It wasn't a scrappy little success story - the script was purchased for a record amount by Warner. Yes, the original had a ending (Rick shoots Strasser and gets arrested), though getting there in the movie went through many hands. This last bit is a good tour through the studio system, where the script, once sold, gets numerous revisions from various writers with different strengths (comedy, romance, adventure), creating the multi-threaded narrative that creates the foundation for its publication. In fact, Casablanca reveals the success of the studio system in creating film. And it was a hit from the start, its release timing with the Allies taking Casablanca itself, the news reports putting that North African city in the forefront of American thoughts.

And it talks extensively about Paris as a replacement for coitus, for the affair between Rick and Ilsa, a married woman (though the film goes to great lengths to point out that she assumed he was dead at the time, it was a change for modern movie morals of the time). Inspector Renault's sexual preferences (very young, very pretty, and very much in need) bubble up to the surface more subtlety in the movie than in the play.

But the book has some gaps as well. While it goes deeply in the bios of the players (the bulk of the actors were themselves European refugees), it does not get deeply into the production schedule - when the shots were taken and where. It does recommend another book, The Usual Suspects by Aljean Harmetz, for such details, but sadly that is not the book I'm reading. And it is a bit silent on the awards that popped up immediately in its wake (Casablanca took three Oscars - Picture, Director, and Adapted Screenplay - no small feat - How did that happen?).

And most importantly, the struggle that We'll Always Have... keys in on is the flak that the Warners took in making this movie in the first place. In the wake of the war, we think we were always a country unified against the fascist threat, but such was not the case. Most movie companies soft-pedaled the Third Reich, since most still had business there in an increasingly hostile environment. And yeah, Jack Warner was hauled into a Congressional Hearing where he was peppered with questions about why he was being so anti-German (at this time, there were more Germans living in Milwaukee than in Berlin). It is one of those things that echo in the modern day - as Twain said, History doesn't repeat itself, but it often rhymes.

Ultimately, however, we get the suburbs of Casablanca, but never fully get into the city itself, much less to Rick's Cafe Americain. It remains a mirage on the horizon, with travelers telling us the tale of the city and its legendary waters.